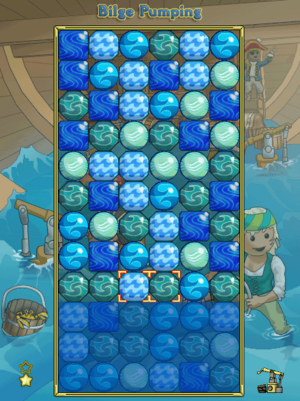 Bilging is one of seven duty puzzles and the first puzzle new players are assigned to practice. Its mechanics heavily borrow from Nintendo's Tetris Attack and Popcap's Bejeweled.

Good bilgers help to remove water that gradually accumulates in a ship's bilges, which is termed bilge water. The bilge meter displays the water level, and the waterline in the bilging puzzle also corresponds to this level. The higher the bilge level, the less effective sailing is.

The mouse or arrow keys move a two-piece target around the board. Clicking or pressing space swaps two selected pieces horizontally. Forming rows or columns of three pieces clears them and the bilge is pumped away. 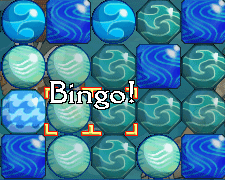 This is an excellent bilge clear.

The best bilgers can create combos that clear more than three pieces. Clearing four or five pieces offers a slight bonus, but one should try to aim for clearing more than one column or row with one move. There are different messages for each combo:

Note: The letters refer to a cleared line of any length. For a Vegas it require two horizontal rows of 3, and two vertical rows, only one of which must be 5 in length. A 3x3x3x5 is a vegas, but scores less than a 3x3x4x5 vegas.

It is possible to create chain reactions when bilging, but as chain reactions are often more a result of random chance than strategy, they do not score highly when compared to combos. However, on rare occasions a long chain reaction will clear many blocks and cause multiple crabs to raise above the waterline - these chain reactions can score noticeably well. Chains can also help to "clear out" a board that has begun to run out of combos. A large number of new pieces from chains gives many possibilities for new combos.

All bilge puzzles start with three lines filled with water at the bottom. This water does not affect the ship's performance, and it cannot be cleared out. If the bilge puzzle is ignored, or played badly, the water level will increase. The higher the damage the ship has sustained, the faster the water will trickle in. This water slows down the effectiveness of sailing. Playing the bilge puzzle effectively will clear out the water to its original level. A side effect of the water line is that pieces moved below it move more slowly.

Crabs are immovable pieces that are cleared when they reach the water line. Crabs can appear at the 5 star level or higher. Crabs offer a high scoring bonus when cleared, and the bonus increases with the height of the water and the number of crabs simultaneously cleared. Clicking on a crab only results in the crab doing a little jig while shrieking.

The puffer fish expands when clicked and clears itself and the eight adjacent pieces. The puffer fish can appear at the 3 star level or higher. It is detrimental to the score unless it results in a chain reaction clear or it causes one or more crabs to clear by rising above the water line. (Destroying a crab by clicking an adjacent pufferfish does not score a bonus.) Letting pufferfish rise near the top of the screen can make converting crabs from obstacles into bonuses much easier--with one click on a pufferfish near the top of a board it is possible to raise three columns by up to three spaces each. Swapping two pufferfish simply swaps them as if they were normal pieces.

Swapping a colored piece with a jellyfish clears all the pieces of the same color on the board. The Jellyfish can appear at the 6 star level or higher. When used effectively, jellyfish often cause long chain reactions, thus creating new combo possibilities on the board.

Bilge scoring is based around the efficiency of moves- the less moves taken to clear pieces, the higher the score. A small delay is acceptable when searching for a new move, however after 10 seconds without a move the game awards a score penalty equivalent to clicking once. A good balance of strategy and speed is best for a bilger.

An approximation of the bilge scoring system has been compiled by players.

Players can increase their chances of scoring an incredible on the duty report after the first league by trying to create a double on the first move, and by looking for efficient combos after that. Players could also attempt to make a bingo within the first few moves. The efficiency of the opening moves is very important to scoring well in the first league.

As the size of the combo made increases, more and more moves can be made while still scoring well . Strategy also changes greatly as a player's standing increases. At the higher levels of bilge, there is more leeway to make extra moves to go for larger combos. At lower levels, players ought to be even more efficient and generally aim for smaller combos.

Generally a break of 3 is worth slightly less than 1 move (and should mainly be used for intermediate breaks), while a break of 4 or 5 is worth between 1-2 moves. A 3x3 double is worth about 3 moves. At high levels, a bingo is worth about 8 moves. Thus, as the size of the break goes up, the bonus received increases quite a bit. Because the puzzle allows some leeway for timing, several seconds can be spent between each move to ensure that it is the best possible move to make.

There is a general consensus among high ranking bilgers that extending a combo leads to a net loss of efficiency. For example, a 3x3 will not produce a gain if an extra turn is spent to make a 3x4. The gain in efficiency may be a half to a third of a move, but that is still a loss. Increasing a 3x3 to a bingo however is worth an additional 5 moves (8-3 moves). This is why the higher rank techniques are heavily focused on making bingo's and bigger combos.

When the water level is higher, crabs become a much more effective scoring tool. When the water level reaches the top (although the highest three rows will always remain dry), simply clearing crabs will score extremely well. Clearing two crabs in the same move (not consecutively which doesn't have a score multiplier) at full water scores somewhere between a bingo and a sea donkey. Efficiency is still necessary, but a few well-placed crab clears can easily lead to an incredible.

Blockade bilging is a variation of bilging played by puzzlers during a blockade, flotilla, or a Sea Monster Hunt. Some bilge pieces will have one of the following 8 bonus shapes added to the piece. Each shape corresponds with a particular token which the ship can use to perform a special maneuver. The bonus shape moves with and is destroyed with the bilge piece. If, at any time, the bonus pieces for the two halves (top and bottom) of a circle, diamond, plus, or ex are together, the bonus pieces (but not the bilge piece underneath) are removed and the puzzler contributes to filling the meter for that maneuver. On a sloop, it requires three bonus pieces to fill the meter.

It should be noted that tokens in bilge tend to spawn in waves. The pieces will all come up with the bottom halves of one token quite often, not giving any top pieces. One technique for tokening is leaving one or two of these halves on the side while continuing to work with the rest of the board waiting for the other half to spawn.

The primary problem with bilge tokens is that they are difficult to make them without a direct loss of efficiency from moves used solely to connect tokens. Add in the fact that low score slows or stops token appearance at all, and the issue becomes clear. If aiming for a specific token, the same saving technique mentioned above works well, but sometimes it is worth sacrificing the half piece in order to increase efficiency (in a bingo say). As long as efficiency is maintained, more token pieces will be generated and give other chances for creating the desired token.

The following trophies are related to bilging:

In release 2005-07-12, the bubbles and droplets were added. The overall animation speed also increased.

Beta release 2003-12-03 modified the bilge scoring to give much more weight to bingos and higher combos.

Before Beta release 2003-11-26, it was not necessary to bilge to keep a ship dry at 0% damage. With this release, all ships were made to take on bilge no matter the damage level if nobody was bilging.