A cutter is a type of ship.

In addition to the basic cutter, three limited edition classes of cutter exist:

A cutter has three scenes: The main deck, the main hold, and the crow's nest. 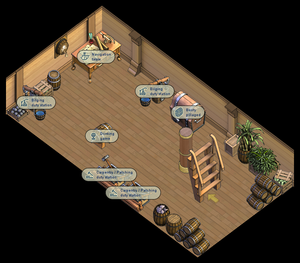 Main hold of an older cutter. Note the barrel for the drinking game.

Older models (exact date unknown but some time before January 19, 2006) of the cutter have a fully-functional drinking game aboard. The game is located in the main hold, and is in the shape of a barrel. The barrel cannot be moved or destroyed.

The cutter was originally called a large sloop, with what is now called a sloop being referred to as a small sloop. The names were changed in late beta testing.

The cargo hatch at the aft of the boat was not present until February 2004, and did not function until two subsequent patches.

When a pirate working the gunning stations could chose to work on two, four, or six guns at a time, the cutter only had six guns to load. When the guns were fixed to four-gun boards as part of Beta release 2003-11-22, the cutter was given two extra guns, bringing her armament up to eight cannons. However, no additional duty stations were added. (This was not necessary as it was not possible to fill the gunning stations before all the guns are allocated.) As a result, to this day a cutter captain has eight guns at his disposal but only six on deck. Beware the phantom guns.

During much of beta, a cutter could be soloed quite easily, as one swabbie was sufficient for carpentry and no water leaked into the bilge unless the vessel was damaged. Adjustments to these mechanics subsequently made it more challenging, until release 2010-06-29, when the number of swabbies on a cutter was raised to four, again making it much easier to solo.