Labor (Commonwealth English: Labour) is needed to finish producing goods. On subscriber oceans, each account is given 48 hours of allocated labor per ocean per day. This labor pool is evenly distributed among an account's characters (one character would have 48 hours, two characters would have 24 each, three characters would have 16 each). A character's unused labor hours can be used by other characters on the same account, provided the receiving character is eligible to use them. On doubloon oceans, 24 hours are allocated for each character with a labor badge and 72 hours for each character with a deluxe labor badge. Thus, an account with three pirates with labor badges could provide 72 hours of labor per day and 216 hours of labor per day if all pirates on that account have deluxe labor badges.

Two labor hours are used when pirates work actively at a shoppe, and one labor hour is used when a container of goods enters the board while they forage. 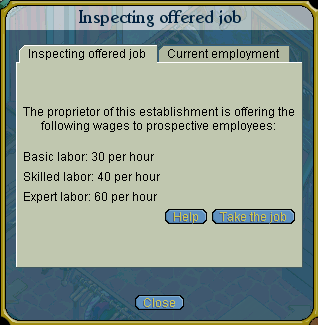 If a shoppe or stall is hiring, there is a Help wanted button on the right shoppe panel. Clicking this button allows pirates to take the job as well as see the wages offered. Different wages are usually given for different grades of labor.

There are three grades of labor: basic, skilled and expert. When playing a crafting puzzle, the quality of the labor produced depends on performance at that puzzle. For shoppes without puzzles, the quality is allocated based on demand.

Note that it isn't necessary to take a job at a shoppe with a crafting puzzle to provide labor. It is automatically provided when performing the appropriate puzzle. A handy way to find a shop that actually has jobs in the order queue, is to do the appropriate mission, this will always whisk pirates to a shop with work available (however do check the wages being offered before starting the puzzle).

A pirate must log in at least once every ten days to keep a job. If a pirate is logged out for ten consecutive days, they will be fired automatically from all jobs.

Eventually, all shoppes will have associated crafting puzzles. For now, alchemistry, blacksmithing, distilling, shipwrightery, and weaving have been implemented.

Online labor is provided by playing the appropriate puzzle in each shoppe or stall. This is the only way pirates without labor badges or subscriptions can provide labor. Two hours of labor is provided for each puzzling session provided the hours are available and the puzzle isn't booched.

Pirates can also provide offline work at distilleries, apothecaries, shipyards, weaveries, and iron mongers. A pirate must have completed a puzzle session within the last 10 days to be eligible for offline work in that puzzle. Achieving an oceanwide standing of "distinguished" allows pirates to provide skilled labor; a standing of "renowned" allows for expert labor. To check current skills, click "Ye -> Pirate Name -> Employment".

Pirates can use up to 24 hours of "advance" labor playing the crafting puzzles or foraging. These hours are then taken from the next 1, 2, or 3 days of labor (for subscriber accounts with 1, 2, or 3 pirates, respectively. Doublooners will always have just 24 hours of advance labor). When playing a crafting puzzle, a rating of booch can give unskilled or basic labor, fine gives basic labor, good gives basic or skilled labor, excellent gives skilled or expert labor and incredible gives expert labor. For the reports that have multiple labor grades, the one that is assigned depends on the actual number report that is behind the scenes (better will provide the better labor).

Labor hours are wasted if a foraging puzzle board is abandoned with containers still on it, as they use up an hour when they enter the board.

Free days for non-subscribers, non-badge holders Today is Saturday. The freeplay days schedule is as follows:

Each pirate can have up to three jobs (except on the

Dark Seas, where six are allowed). Labor will always go to the highest-paying job a pirate holds, unless that shop has no work or too many employees.

If jobs are taken at crew stalls or shoppes, it is a good idea to make sure each stall or shoppe gets labor by either splitting the jobs between three characters or making sure the crew's stalls and shoppes have standardized labor rates.

Wages paid for shoppe jobs are automatically delivered to a pirate's inventory every twelve hours, or just before a server reboot.

To view a report of how a pirate's labor has been used, click on "Ye -> Pirate Name -> Labor". A pirate's labor report shows where his or her labor is being used, what type of labor he or she is giving, and the wages they are being paid for the labor. Hours spent foraging and unused hours are also recorded. Reports show ten days of labor history.

Shoppes can also display a "Labor report" by clicking "Manage Labor->Labor Report". This shows the type and quantity of labor the employees have produced, and the wages paid to them. As with pirate labor reports, ten days of history are shown. Additionally, products ordered, awaiting delivery or cancelled on each day are shown.

Depending on the type and size of a stall or shoppe, pirates are limited by how many hours of labor they can provide per hour. This number can be viewed in the form of Labor per Hour under the "Manage Employees -> Staff" menu of a "Manage the Shoppe" radial menu. Multiplying this number by 24 shows the maximum number of hours a shoppe or stall can use each day.

Shoppes are also limited by the amount of expert and skilled labor they can produce. Stalls have these limits listed in their respective bazaars under the "Run your own stall" menu. Regular shoppes can produce approximately two times that of a deluxe stall. Upgraded shoppes can produce approximately three times as much. For example, a Deluxe Tailoring Stall can poll up to 8 workers per hour, up to 4 of whom can provide skilled labor and 3 of whom can provide expert. This means that a corset, which only requires 30 labor units, will take at least 5 real hours to complete if ordered from a deluxe stall, because it needs 15 hours of expert labor. An upgraded tailor shoppe, however, would be able to finish the same corset in only 2 hours because it can use about three times as many expert laborers per hour.

How shoppes use labor

Labor is taken from pirates in a round-robin fashion until either the maximum labor output is reached, there is no labor left to provide, or there are not enough employees to reach the maximum output. Expert labor is always provided first, followed by skilled, and then basic.

Getting value out of a labor badge

Both the standard and the deluxe labor badges allow 720 hours of labor to be produced per 5 doubloons. In order to break even on the cost of the badge, therefore, one needs to ensure that:

The first point can be helped by taking the full three jobs allowed, but the second can be harder to ensure, as it can be difficult to gauge what a good wage should be. To calculate the minimum wage required to break even, the following formulae can be used, where x is the current doubloon price on the ocean; y is the minimum wage.

It is desired that the total wages received should exceed the PoE spent on the badge, or

The second formula gives the minimum average wage needed to break even. The difference between an offered wage and this minimum wage can be considered profit. Note that the formula considers all labour hours to be used. If not all labor hours are not used, the minimum wage will be higher.

The labor hours per day available to subscription accounts was changed from 36 to 48 with the Ocean merge on 2012-01-31.

The labor hours per day available to subscription accounts was changed from 24 to 36 with release 2010-05-18.

The way in which labor hours are used in foraging changed with release 2008-08-27, with the implementation of the foraging puzzle. Before the puzzle was implemented, it was possible to use up a labor hour while not managing to forage anything.

In-game labor reports were added with release 2005-01-05. Previously pirates would not know how their hours were used except by checking the (now defunct) money report. Shoppe and stall owners no longer received nightly emails with this information.

Labor limitations at stalls and shoppes without crafting puzzles increased with release 2004-02-20.

The "direct labor" system was introduced with the release of distilling, Beta release 2003-11-22.

Maximum labor throughput was introduced with Beta release 2003-10-06. The previous system had a maximum employee limit. Labor output was also reduced in this release (it had been higher in the past due to lack of jobs).

Automatic firing for players who haven't logged on in ten consecutive days was added in Beta release 2003-09-25.