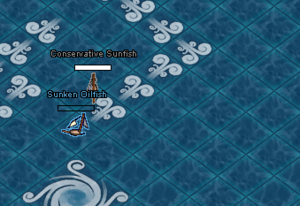 In this image, the Sunken Oilfish is in the process of sinking. (Click for a larger image)

Sinking is the loss of a ship (See Restoring sunken ships section). This can only happen in one of seven situations: During a sinking blockade, a sinking flotilla, a sinking imperial outpost, an encounter with Atlantis, an encounter with the Cursed Isles, and encounter on the Haunted Seas, or PvP with a ship from a warring flag. In these circumstances, the ship sinks if its damage meter becomes completely full. A ship only sinks if it is shot or rammed by another ship (hitting rocks will not sink a ship, nor will a ship sink immediately if it enters the battle with full damage).

Sinking causes the loss of the sunken ship, its charts, the contents of the hold, coffers and the booty, any furniture on board and its contents. There is also a very slim chance that those onboard (except non-warring jobbers in a PvP battle) will get an injury. Those not receiving an injury will receive a fish for use in rumbles. In either case, the pirates must stay until they receive the message, "This ship has been sunk!"

All players aboard the ship are sent to the last island on which the ship that sank was located. Any pets roaming on a ship when it sinks automatically swim to safety and are returned to their owners. 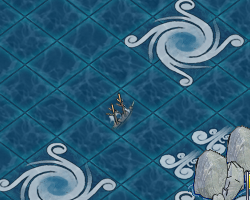 A sunken ship on a blockade board. (Click for a larger image)

Sunken treasure appears in flotilla combat, sinking blockades, Atlantis and Haunted Seas encounters in the place of a sunken vessel/monster. A vessel will only leave sunken treasure if that ship belonged to a Brigand King, or in the case of player vessels, had PoE aboard. In addition, Sea monsters always leave behind treasure. When another vessel remains adjacent to, or on top of the sunken treasure for all four moves of a turn, all pirates aboard are able to haul treasure in order to bring aboard booty from the sunken vessel. The sunken vessel fades as treasure is hauled from it, and then disappears once all the treasure has been recovered.

In this image, the Lonely Hamerhead is listed as Resting at the bottom of the sea from a vwho.

As of release 2011-06-28, pirates can salvage sunken ships. When the ship sinks, the owner receives a ship in a bottle in place of the deed. Then, the person holding this item can take it to the shipyard and restore the ship. The ship in a bottle item decays after 60 days.

The cost for such a restore is as the cost for a new ship of the same base type (meaning, any limited edition ship has the same price as the plain ship with the same name.) All commodities in the hold, bid tickets and pieces of eight in the booty and coffers, and any charts and maps on the navigation table will be lost forever. All furniture - including storage furniture and their contents - props and paint are restored along with the ship.

The following trophies are related to sinking:

Prior to release 2011-06-28, ships sunk in a sinking environment were lost forever.