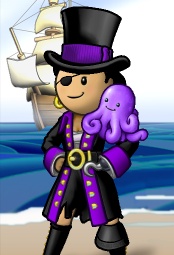 Dexla might be spotted in semi-retirement tinkering about in her Cerulean shipyards, Frigate-Me-Not on Spring, or Silver Sails on Jubilee. She currently holds the titles of Captain and Muse of the crew Infamous Rapscallions, Queen of the flag Nefarious Miscreants.

Dexla washed ashore on Midnight in early August of 2006. She has a vague recollection of wandering around as a greenie for spell but considers the crew Johnny's Rogers, as the first crew she officially joined. By the end of August, the JR's captain chose to move the crew from the flag Don't ask for barnacle to the flag Avalon but within a few weeks, the JRs began to fall apart, and Dexla shopped around for a new place to call home within the flag. It was near the end of October, 2006, when she found herself in the Minrothad Guilds.

During her time in MG, a fantastic friendship grew between Dex and Spinbad, and in May of 2007, the decision was made to venture out to see what might happen. Two days after co-founding the crew Nefarious Miscreants, the flag Infamous Rapscallions was created. It was at this time, Dex was permanently attached to Spin's hip and enjoyed countless hours of pillaging and trouble-making across Midnight, and for a short time on Malachite. In 2009, when opinions clashed between the crewmates and the ideals which the crew was founded upon, the pair felt it it was a good time to step away from their roles and moved on. They returned to Midnight to retire peacefully in a crew and flag alternatively named after their original creations. Dexla focused her attention on YPP Events, where she played participant, assistant, or hostess on multiple occasions, and had the pleasure of making piratey friends on every ocean. In the years that followed, Dex casually wandered about, sometimes as different characters, sometimes on different oceans, joining pillages or various crews here and there.

Link to events assisted, hosted, or entered and dates she likes to remember

Link to trinkets collected or awarded

Dex's Atlantean Battle horn was one of 3 new trinkets added to the regularly occurring Atlantean rewards in September 2013.