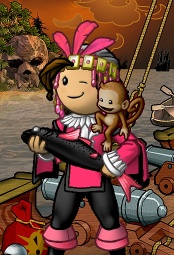 Princessj is a pirate, playing mainly on the Sage Ocean. Well known for her rumbling skills, Princessj also takes pride in her lovely villa on Spaniel Island and her large trinket collection. She also controls the name of Chariste on many oceans.

Princessj was persuaded into Puzzle Pirates in mid-August, 2005, by her real-life boyfriend, who plays as Scarymuffin. She followed the crew The Lost Lot from the Viridian to the Sage Ocean, and helped tremendously with the start up of the flag The Light Brigade, eventually becoming a princess of the flag.

After The Light Brigade disbanded, she went with her crew to Go with the Flow and got married to Scarymuffin on February 10th, 2006 on the Grand Frigate, the Magical Carpetshark, which was a gift from Scarymuffin to her. More recently, Scarymuffin and Princessj were a part of the team, Deadly Frosting, that won the Sea Battle tournament in the sixth season of OCL and earned a white monkey each.

Princessj has a strong attachment to Disney and especially the Aladdin series, deriving her own name from Princess Jasmine. Her tiger is called Rajah and her Grand Frigate is called the Magical Carpetshark for the same reason. After winning a tan monkey familiar in rumbling, she decided to continue with the theme and named it Abu.

Princessj left The Lost Lot in late March, 2006 and joined with Jackspeed and Skeletons in your closet until Jackspeed retired. Around mid-July, 2006, Princessj joined with Helystra and Hell's Angels and has been with them ever since.

While Princessj retains her name on Sage and Viridian, she is known as Chariste on the Midnight and Hunter Oceans.