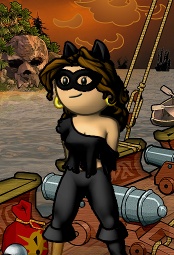 Chocorose is a pirate, who is the senior officer of the crew Lost and member of the flag Tenebrae on the Cerulean Ocean.

Chocorose started life in August of 2005 on the Cobalt Ocean as Aurisai. Under this name she was officer of the crew Heavenly Kings before it split.

After changing her name, she joined Razor's Requiem, under the command of Razorblade. She held the rank of senior officer, later becoming senior officer of Lost when the two crews merged. As lady of the flag A Song For The Deaf, she assisted Razorblade in his term as governor of Harmattan Island.

After several blockades in one day resulted in the loss of all of Song's islands, Chocorose followed Razorblade into a new crew, In a Can. She later left for personal reasons, joining several crews including Heian Era and Sea Dragons, before leaving the game on December 20th, 2006. She returned in March of 2007, spending time in Turquality, All Alone, and Stark Raving Mad. She was also princess of the flag Devine Penetration for a short period. Issues with poor internet connections lead to her leaving the game until Spring 2014. Currently, she is senior officer of Lost.

Chocorose is an avid collector of avatars.