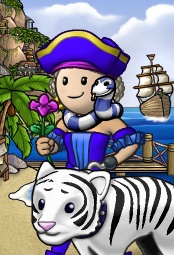 A gift from Crazee

Gwiddon is a pirate on the Sage Ocean. Her forum username is Ddraigeneth.

Gwiddon is currently a member of the crew Impending Insanity of the flag Good Grief.

It began on November 22nd, 2005. Introduced to the game by her cousin, Gwiddon was captivated by the strange new world of YPP. Bright-eyed and green-named, she set out on missions of self-education, quickly taking a liking to sailing, as well as swordfighting.

Appreciating the unique appearance of the crew name, Gwiddon soon joined The Gnomes of Zurich, where she served as a Pirate for a short time. It was in Wiscons Inn on Wensleydale that everything changed.

Between bouts of carousing, she struck up a conversation with two others in the Inn, adding Crazee as a hearty before leaving to explore some more. Within a short time, she switched to his crew, Black Knights of the Sea, and continued her missions. When Crazee approached her about officer training, he was surprised to find she had already been learning about leading pillages from the Navy. Soon progressing to Senior Officer, Gwiddon served happily under Crazee until he eventually grew tired of his responsibilities as Captain and merged into Pernix Adaeque Simius, at the time controlled by Inanna. Though nervous to have to get to know so many new people, Gwiddon quickly settled in and made friends.

She became Captain of PAS in March of 2007, resigning her title when she had to leave the game for a time. She has no plans to resume captaincy.

More concerned with having fun than making PoE or achieving great things, she can often be heard exclaiming, "It's just a game!" amidst political HWFO.

Winner, Weekend Doodle 1 - Doodle It Yourself!

Return of the Gwiddon {Avatar Shoppe} 2012

Gwiddon's Avatar Thingmajiggy (discontinued after the loss of her drawing tablet)