The 2008 Halloween events began on the 14th of October, 2008, with the Halloween Bonanza Promotion, before the main feature, Trick-ARRR-Treat, commenced on the 20th. Similarly to past Halloween events, masks could be purchased from the palace shoppe. The event culminated in the Masquerade Ball, which included the unveiling of the game's newest familiar, the serpent. It also included a new riddle, which eventually lead to the release of the Cursed Isles. 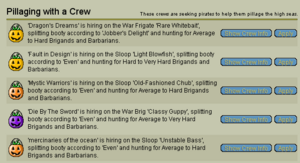 An example of the voyages tab

Pirates in all oceans were divided into five teams - pirates from the same crew were all placed in the same team. The team names each made reference to a type of candy and a type of Halloween monster. Pirates participated by defeating brigands and barbarians while on a pillage, earning candy in the process - this candy came in the form of trophies. During the course of the event, all brigands and barbarians (save those aboard Brigand King vessels) wore masks. To help pirates in pillaging with their team-mates, all jobs on the notice board included the team icon of the crew offering the job. The standings for each team were regularly tallied and updated on a special "Competition!" tab of the notice board.

As well as those mentioned above, the following trophies are related to the 2008 Halloween events: 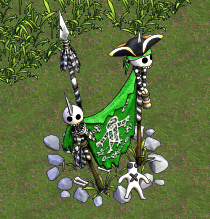 Beginning from October 24th, pirates who visited certain uninhabited islands on each ocean would turn into zombies. Players could opt-out of becoming zombies by opening the client options and unchecking the "enable special event effects" check box on the General tab - conversely, players who want to become zombies but find themselves unable should ensure the check box is checked. The islands contained an Incantation, which, when clicked on, would display a riddle. The online version can be found here. The riddle read:

The Incantation also contained a message indicating the next hint would be released in three days' time. The islands with Incantations were: 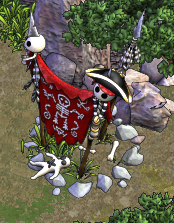 Beginning from October 27th, pirates who visited certain islands on each ocean would turn into skellies, though this time the islands were not all uninhabited. The zombie transformation remained on the original islands, giving pirates the choice of whether to become skellies or zombies. Once again, the island contained an Incantation which would display a riddle, viewable here. The riddle read:

The Incantation also contained a message indicating the next hint would be released in two days' time. The islands with Incantations were:

Beginning from October 29th, pirates who visited certain islands on each ocean would turn into ghosts, though this time the islands were not all uninhabited. As before, the previous transformation remained on the original islands, giving pirates the choice of whether to become ghosts, skellies or zombies. Once again, the island contained an Incantation which would display a riddle, viewable here. The riddle read:

The Incantation also contained a message indicating that this was the last Incantation. The islands with Incantations were: 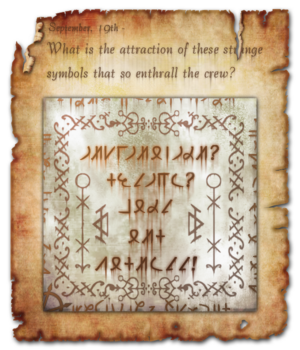 It was quickly discovered by forum-goers (who had previously correctly predicted the location, time and essence of the ghost transformation on most oceans) that the third riddle referred to another island on each ocean. The islands in question now contained destroyed buildings (that is, "with buildings erased") and were strewn with rubble. Also scattered around the islands were skulls and skeletal arms holding pieces of parchment which, when viewed, would display pieces of what appeared to be a ship's log. Each island also contained another page displaying a message written in some runic language.

The islands on each ocean where the zombie, skellie and ghost transformations occured formed a triangle, with this fourth island being positioned inside or close nearby (that is, "an island embraced"). Forum-goers noted that Vargas the Mad's symbol includes a triangle.

The three pieces of parchment, shown below, each contained a hint relating to Vargas. The first capitalizes the word Enlightened, the second capitalizes Book, as Vargas is known to hold a scientific tome, and the third capitalizes Madness, Vargas' title. Forum users realised that these clues directed users to look at Vargas' pirate info page. Strangely, the three pieces appear to look more aged the newer they are - the freshest-looking one is dated July 7th, the middle one August 13th, while the oldest-looking one October 31st. 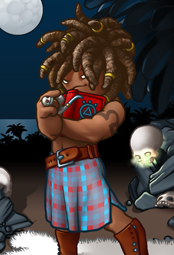 Vargas with the glowing skull 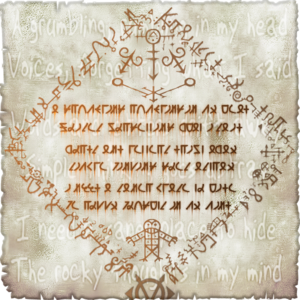 The pirate info page portrait for Vargas now included a skull with glowing eyes. This was the answer to the second clue - "a box all of bone", containing the light hidden "in plain sight". When this skull was clicked on, it would bring up another page covered in runic text. This page, however, had english text written in the background. It was quickly realised that this english text had the same spacing as the runic language, and so was a direct transliteration, allowing the other message to be transliterated. This message read:

Using this decoder, the original message could now be read: 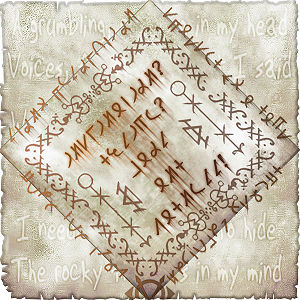 After a while, forum members realised that the original message had a second message, written in the border, with only half of the text showing. Later, another user realised that if the center square of the message is overlaid over the diamond on the decoder, such that the symbol in the lower-left corner is aligned with the symbol on the bottom of the decoder, the entire second message could be read, as the other half of the message was hidden in the border. Starting from the symbol, then, and reading clockwise, the message reads:

The statue of Vargas. 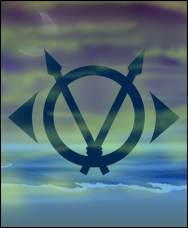 On October 30th, Ocean Masters released an article in The Spyglass stating that nine magical items had been detected on each ocean [1]. The magical items were each supposed to contain a specific symbol, shown at right. At the same time, pirates discovered statues of Vargas the Mad located in government buildings on Ringer-controlled islands - one per ocean. These statues could be found in:

Some confusion began as to what the nine symbols were, and what pirates were supposed to do with the statues, since they were not clickable. The statue, however, was certainly one of the nine, as the symbol was located on the front of its pedestal. Some hints dropped by Sophocles at the Cobalt statue confirmed that the three Incantations were three of the nine, and closer inspection revealed that the Incantation banner itself was the symbol - two spears in a circle. In addition, both the coded message and the decoder also contained the symbol - it was the mark used to align the two pieces when reading the hidden message. Lastly, though they do not actually have the symbol on them, it was decided that the three journal fragments comprised the last three of the nine.

Other hints from Sophocles revealed that the statue was in some way important, but pirates could not work out what should be done with it. It was deduced that of all the clues given so far, the only one not yet addressed was the hidden message. It was clear from reasoning and Sophocles' hints that it referred to the statue in the "stony resolution", having been "cast out" by Vargas. But forum-goers could not determine the "dark dreamy solution" needed to "crack" the statue. Then shortly after noon on the 31st, when the Masquerade Ball was meant to start, pirates realised that simply speaking the phrase "a dark dreamy solution" while in the same scene as the statue caused it to reply with "I'm left uninvited, but the snub will be righted. Unless the list is amended, I'll stay offended by those Masters of Ocean behavior."

Speaking this phrase to the Vargas statue on each ocean finally allowed the Masquerade Ball to kick off.

The Masquerade Ball was the big close to the 2008 Halloween events, including the Incantation puzzle. It was held on Halloween, the 31st of October, from noon, and, due to a large international demand, on All Saints Day, the 1st of November, at times varying from ocean to ocean. Despite the name, pirates were not required to wear masks to the Ball, but the majority of pirates dressed up for the occasion.

Noon on Halloween saw pirates gathering on the party islands, but nothing seemed to be happening. While confusion reigned, the OMs in charge dropped hints about how the riddle was yet to be solved, and that Vargas, the guest of honor, still needed to be invited. It is at this point that pirates investigating the riddle discovered that speaking "a dark dreamy solution" to the Vargas statue in effect invited him to the party. Inviting the statue on all oceans showed the OMs that pirates wanted him there, and so summoned him with the incantation "I call upon Aeolus to lend us his magical winds, and whisk the fallen pirate Vargas to us!" 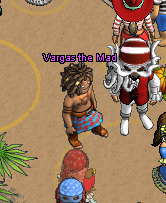 Vargas the Mad in person

This brought Vargas the Mad bodily to the island. Vargas was shown with a magenta name. The OM-in-charge and Vargas then staged a conversation, which revealed that Vargas had been planning a destructive spell that would have wiped out all life on the oceans - only the intervention of those who had solved the riddle prevented that.

The Masquerade Ball events then started off. First in line was a single-round event blockade, as Vargas attacked the party islands on each ocean. Curiously, the contending flag on every ocean was Admiral Finius' Fleet of his Imperial Scaled Highness, rather than Vargas' own The Enlightened. Only on the Sage and Viridian oceans was the blockade won by a player flag. Following the blockade, Vargas left the island in a huff, claiming to return to his home island. He left behind another statue of himself, which contained a clickable link to the Cursed Isles introduction. Following Vargas' departure, waves of skellies and zombies would attack each island, giving party-goers the chance to take them on. 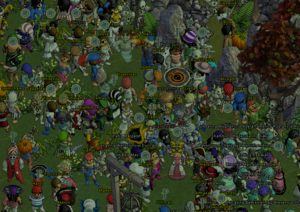 The Ball in full swing on Kuhio Island

Shortly following the blockade, the Serpent Familiar Raffle was drawn. The raffle worked by having pirates register for a tournament, which was set to be randomly seeded. When the tournament was created, a number was randomly generated. The person that many spaces down from the top in the first round order when the tournament started, not counting byes, won a one of the serpent familiars. Two other pirates would be randomly awarded a limited-edition pet and an item of furniture. Pirates could then compete in the tournament for a share in the prize pot, but no significant prizes were awarded for winning.

Throughout the whole event, Ocean Masters ran trivia quizzes, where the first pirate to give the correct answer would win Halloween-themed furniture, trinkets and masks. Party islands were also liberally furnished with parlor game tables and tournament boards for pirates to use. The same events were run the following day, but at different times on different oceans. This time, only Viridian saw a player flag win the event blockade.

Following the Masquerade Ball, Vargas' cursed isle statues were moved to the islands with the Skeleton Journals, where they were made a permanent fixture.

This page lists all of the winners of the serpent familiar during the 2008 Halloween events.