A penguin as seen on the pirate select screen.

All pirates were transformed into penguins. These penguins looked like penguin pets, except they wore hats and eye patches and carried fish skeletons. There were at least nine colors of penguin, with a pirate's usual hair color determining the color of penguin they became. (Lime penguins were very rare and may have been the result of a bug.)

Pirates could out opt by going to Ye > Options > General and disabling "special event effects." This would return the pirate to normal, although other pirates would still appear as penguins. Players who opted out could still participate in the team competition.

It was not possible to take a portrait while in penguin form.

Brigands, barbarians, and Imperial outpost soldiers were transformed into seals. 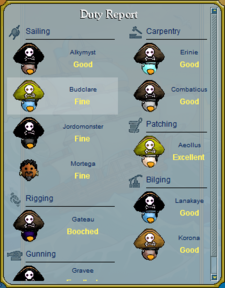 A duty report showing most of the penguin colors. Missing are the white and lime penguins. 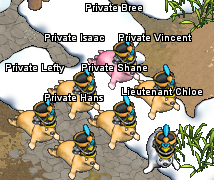 Imperial outpost seals in a swordfight. 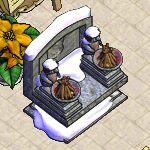 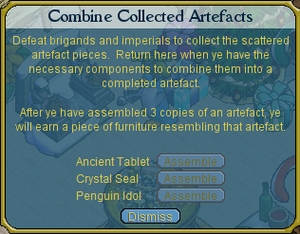 On each ocean, an event pirate named Festivity had purchased a house and filled it with all sorts of holiday-themed furniture. The house contained a Penguin Altar which allowed pirates to assemble their artefacts. Clicking on the altar would bring up a dialog box. If a pirate did not have all of the pieces for an artefact, that artefact's "assemble" button would be greyed out.

Festivity's house could be whisked to using a button on the Events tab of the noticeboard. In addition, artefacts could be assembled at a location on or near the dock of the following islands:

The artefacts were assembled as follows:

For every three copies of an artefact type assembled, the player was awarded a tabletop furniture item of that type.

Each ancient tablet spawned with a random standard color for its cloth; the other two artefacts do not change color.

As well as those mentioned above, the following trophies are related to the 2015 Holiday events: