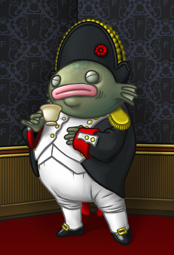 Admiral Finius is one of the original five Brigand Kings introduced to the game in April 2006. Like most brigand kings, he can be fought in either a swordfight or rumble.

Admiral Finius became the first Brigand King to take control of an island on June 30, 2007 after he won the blockade of Jorvik XVII on the Midnight Ocean in three uncontested rounds against the flag Tyr's Own.