A Krak in the Ice logo.

A Krak in the Ice

Pirates in all oceans were divided into five teams - pirates from the same crew were all placed in the same team. The team names each made reference to a variety of the Little People. Pirates participated by being aboard ships which defeated brigands and barbarians while on a pillage. After winning a battle, each pirate on the ship would win a toy part (which appeared as stackables in the "miscellaneous" section of the booty panel). Parts from three different toys could be won, and each toy had three parts. 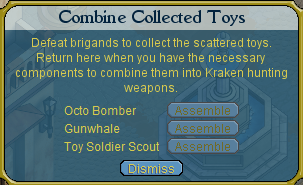 If a pirate had collected all three parts from a single toy, they could earn extra points for their team, and win trophies, by assembling the parts into one toy. On each ocean, an event pirate named Festivity had purchased a house and filled it with all sorts of holiday-themed furniture. The house contained a festive fir which allowed pirates to assemble their toys. Clicking on the fir would bring up a dialog box. If a pirate did not have all of the parts for a toy, that toy's "assemble" button would be greyed out.

Festivity's house could be whisked to using a button on the Events tab of the noticeboard. In addition, toys could be assembled at a location on or near the dock of the following islands:

The toy parts were assembled as follows:

As well as those mentioned above, the following trophies are related to the 2014 Holiday events: