The Tooth and Nail logo.

The 2011 Halloween events began on 18 October 2011, with release 2011-10-18. This release included the introduction of the new Jack-o'-Lantern furniture item (available from furnishers, the re-release of limited edition black pets, and the introduction of the new black pony pet, or 'Night Mare'. Special Halloween top hats, masks, vampire raiments, and trinkets were also made available from the Palace Shoppe. 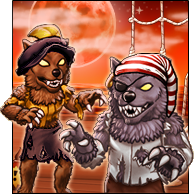 On 19 October, moon amulets and wolfsbane amulets appeared for sale at the Palace Shoppe. These amulets allow a pirate to change their appearance to become a werewolf, or to remove the werewolf curse, respectively. These amulets last for five days after purchase, and can be used multiple times. Limited edition Halloween-themed shipboard furniture was also made available for purchase from furnishers. Also on 19 October, the Tooth and Nail team contest began.

Pirates also have a chance of being cursed with the werewolf appearance if they lose a fray to the rumbling werewolves.

Any torso or leg clothing being worn at the moment a pirate becomes a werewolf will appear as rags of the same colour, while shoes will disappear - note, the clothing items themselves are unaffected, and will be restored when the pirate becomes human again. Any attempt to change clothing on the torso, legs or feet will be unsuccessful while the curse is active. Headwear is unaffected.

A shadowy presence known only as "The Grizzled Baron" has come and cast dark magic beneath the autumn moon for his grim amusement. Now howling, hairy havoc has broken out across the darkling seas! Show yer the leader of the pack and break the power of the sinister beast lord by battling the werewolf hordes and coming out on top! But keep yer wits about ye and embrace the beast within without letting yer mind fall under his spell!

The Tooth and Nail contest began on October 19, with pirates on all oceans being randomly placed into one of several werewolf packs (or teams). For the duration of the competition, you'll earn points for your pack for every roving band of island-dwelling werewolves you defeat in a rumble fray. At the end of the competition, all participants will receive a commemorative trophy, with the most prestigious going to the members of the victorious pack! The Tooth & Nail competition will stretch through Halloween until Monday, November 1 at 3 PM PDT.