The 2005 Halloween events began with the introduction of modified clothing hat "masks" on October 25, 2005, and concluded with their removal on November 3, 2005. The highlight of the Halloween events was the Zombie Apocalypse event that took place between October 29 and October 31.

A notable feature of the 2005 Halloween celebration was the return of mask hats, which debuted in 2004. New portrait art and a new portrait background were also introduced to commemorate them. The men's musketeer hat, the women's muffin hat, and both sexes' savvy hat did not have any unusual effect. Additionally, the women's feathered hat only appeared as different in portraits, and pirates without hats saw no additional effect.

A variety of hair and skin colors.

During the first part of October 29, players could be infected by other players and turn into zombies. When this happened, portraits featuring the infected player showed the zombified version of him or her. All zombies had different hair and skin colors based upon their original pre-infection colors. Instead of the usual selection of eyes and mouth expressions, zombie players always had wide, red eyes and an open mouth with rotten teeth. Masquerade masks were still available to wear. 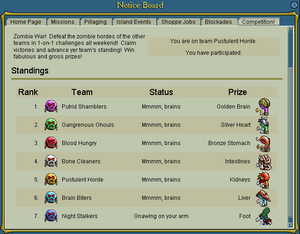 The competition tab on the notice board. It shows the standings of each zombie horde.

By the evening, the Zombie Apocalypse had begun. All players were divided into seven hordes of zombies upon logging into the game. Each time a player took part in a 1-on-1 challenge versus another player, the results were recorded and tallied toward the weekend total for each horde. The standings for each horde were regularly tallied and updated on a special "Competition!" tab of the notice board. At the conclusion of the Zombie Apocalypse, which was around 1 a.m. Pirate Time on November 1, the winning team members were awarded "Golden Brains." Each participating member on all teams received an award, which took the form of an untradeable trinket. Each trinket was a body part, supported by a colored zombie arm based on the color of the team which won that award.

The seven colors of zombie.

During the Zombie Apocalypse, players could not wear hats, restricting the special Halloween masks. All pirates had black hair and skin the same color as their team.

If a player wished to opt-out of being a zombie for reasons of personal belief, he or she could be given a Cure-all elixir potion by an Ocean Master by requesting one in a petition. Cure-all elixirs also removed all injuries, however, and needed to be taken every time a pirate logged on.

The competition results are detailed below.

Combining the ocean scores, and assigning 7 points for a win all the way down to 1 point for last place, gives the following final scores: