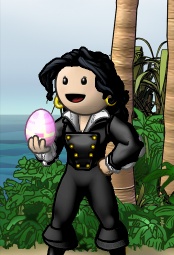 Dcyborg is captain of the crew Awkward Squad on the Cerulean Ocean.

After spending more than a year with the flag Indestructible Fury in its various incarnations, she has decided to go from crew to crew and meet new pirates on the Cobalt Ocean where she ended up with S.C.A.P. She was indispensable in planning the propaganda surrounding the picking and taking of Carmine.

After the attack on Carmine by the Brigand King Vargus. Dcyborg left S.C.A.P. to start her own crew and pillage across Cobalt.

She is currently using her shipyard Weapons of Mast Destruction on Cobalt to sell the cheapest and fastest available ships and bludgeons.

A native to the Cobalt Ocean, she has recently forayed into the Midnight Ocean with the crew We're From Coblat - which is a collective crew of Cobalt-based players "bent on creating mayhem and havoc" - within the flag Notorious Fandango. With the Fandangos disbanding, The Cobalt crew is now in the flag Spirit of the Game.

1 Winning bid consisted of: 286 interarch charts, 514 sticks, 60 fish, 521 rags and 1 skeleton bone.
2 Earned 74 points and was the highest placed player to not win any of the actual tournaments.