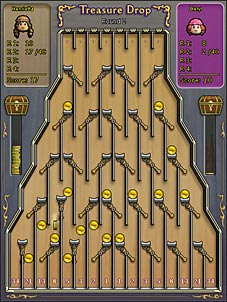 Treasure Drop is a two-player betting game. Players take turns dropping coins onto a series of levers. Points are scored when coins reach the bottom of the lever system. The number of points scored depends on the number of coins reaching the bottom and where they land—typically, the edges are worth much more than the center.

Treasure Drop is free to play two days a week.

Treasure Drop is played with the mouse. Players can choose any of the entry slots seen at the top of the board by hovering over one of them with their mouse. Clicking the mouse button drops the coin, and the game action commences. An hourglass next to each player's head shows how much time remains to play in that turn. If time runs out, a random slot is selected.

Players can choose to play in any of several columns using the mouse.

A single coin will fall in a straight line until it either:

If a coin falls onto one or more other coins while falling (not counting coins resting on pads), the coins will combine to form multi-coins. It is possible to form doubles, triples, and even quadruples.

Multi-coins continue to fall until they:

Each switch has two sides: the pad, where a single coin can come to rest; and the lever, which changes the direction of the switch (swinging the pad to the other side). The mechanics of switching are as follows:

There are several complicated mechanics that flip switches.

Each game is played in four rounds. Each round has a point total that must be reached or exceeded by one player to move to the next round. Coins remaining on switches will start in the same position at the start of the next round. Round targets for the default rules are:

The point values for the bottom slots also fluctuate with each round. From left to right, they are as follows:

When either player reaches the target number, his or her opponent can drop one more coin that round before the next round begins. A coin meter below each player shows his or her relative progress towards the goal. When the game is over, the treasure chest above the coin meter of the winning player opens up to reveal a chest full of treasure.

Treasure Drop can be played in many different ways:

Time variations
The standard time per move is 30 seconds, but this can be adjusted by the player issuing the challenge or creating the parlor table to 1 minute per move or 2 minutes per move.

4th round halved
In order to lessen the chances for a single drop determining the outcome of the fourth round, players can choose to play with the point values in the bottom slots halved for the fourth round only.

Turbo
When playing with Turbo turned on, players have only five seconds per move and the animation speed is greatly increased. 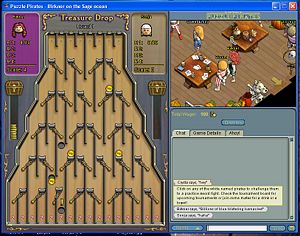 An infinite hole loop in action - click for full image

Holes
When playing with Holes configuration turned on, "warp holes" will appear randomly across the board. If a coin drops into one, it is warped to another hole and continues falling. However, this is negated if the coin about to fall into the hole "doubles up" with a coin bouncing up from a switch triggered below.
In certain very rare cases, endless loops are possible with specific combinations of holes. One such loop may be seen in action in the image to the right.

It is important to score with multiple coins from a single drop; preferably on the outer edges of the board. However, since round 1 scores are all 2 points, the first round is played differently from the rest. It is also important to consider what a move will allow the opponent to do. A large scoring drop that gives the opponent an even bigger drop is counter-productive. A higher level strategy involves forcing the opponent to create large scoring opportunities.

When playing holes, winning the first round gives one the first chance to hit "lucky" holes that appear at the beginning of the second round, which makes the first round much more important in holes than in normal play.

The following trophies are related to Treasure Drop: