The 2006 Holiday events began with the introduction of Santa Hats and Candy Cane trinkets to the palace shoppe on December XXth. Santa hats cost 1,000 PoE for red, and 3,000 PoE for any other of the 18 colors. Candy canes cost 1,000 PoE, and also cost 1 doubloon on green oceans. 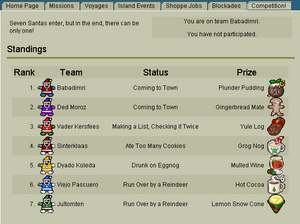 The scores on the Ice Ocean on Christmas Eve.

The highlight of the Holiday events was the Santa Rampage event which started on December 23rd and ended on January 1st. All players were divided into seven hordes (each named "Santa Claus" in various languages) upon logging into the game:

Interestingly, the name Santa Rampage is derived from a festival in Austin, Texas

Each time a player took part in a 1-on-1 challenge versus a player of a different team, the results were recorded and tallied toward the weekend total for each horde. The standings for each horde were regularly tallied and updated on a special "Competition!" tab of the notice board. At the conclusion of the Santa Rampage, the winning team members were awarded "Plunder Puddings." Each participating member on all teams received an award, which took the form of an untradeable trinket. 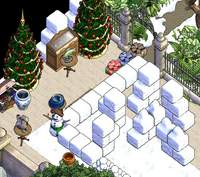 A scene with all the types of snow-related furniture.

In addition, various extra festive furniture items were added to the game, including snowmen and snow blocks which could only be placed outside (for example in gardens). The furniture would "melt" with the rest of the snow special effects. At the same time, Bearded Santa Hats were also introduced. Snow also returned, taking the place of grass floor tiles. 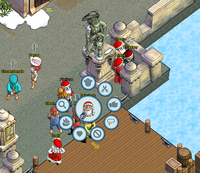 On the same day, a PoEmail was sent out to all players who had registered an email address with Three Rings. It contained a link to obtain a free festive outfit consisting of a red Bearded Santa Hat, black Santa boots, as well as a random piece of old, red coloured torso and legs clothing.

Pirates could out opt by going to Ye > Options > General and disabling "special event effects." Players who opted out could still participate in the team competition.

The results of the Santa Rampage competition were as follows: