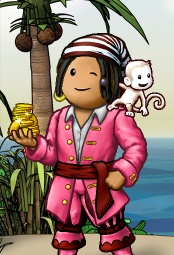 Netzu has been playing on Cobalt and Midnight for over 2 years, occasionally taking part in blockades and other areas of the game in that time. But after moving to a new main, has found time to blockade regularly. After short spells in a few crews for the purpose of blockading he decided it was time to create his first crew. He started the crew Pentacle where he was made captain. He tried for around a month to get the crew off the ground but with a lack of time and obsession for forum reading he decided to take a step back from that responsibility. Pentacle then merged with Soza's crew Elysium. They had much fun pillaging, again other problems and commitments got in the way which delayed the progress of the crew. After a few weeks they decided that the crew was never going to take off. So they made a decision to merge with Soza's old crew The Pittsburgh Pirates, the main crew in their flag Mountees. In his time with Mountees Netzu was involved in 3 of their blockades

Netzu is now actively involved in blockading within the more administrative side of that mechanic. Since coming to Cobalt, Netzu has been involved in numerous blockades as a Navver, XO and as Admiral. Netz has been hiring himself out for no fee across all oceans as a blockade Mercenary and prides himself in his ability to prep a blockade and not just execute them.

He prides himself on having a reasonable grasp on the art of Swordfighting as well as a strong ability in the other carousing puzzles, especially Drinking which he won a familiar for.

After spending over a Year of his Career with The Pittsburgh Pirates, Netzu finally moved to Retribution on the 27th June 2007. Following a large period of inactivity from his old crew. He joined Morbuzaan's crew, who was a player he had worked closely with over the Months previous, to execute Oceanus Expeditus' Blockade of Raven's Roost.

Following the blockade of Raven's Roost, Oceanus Expeditus spent almost a year preparing for their second series of blockades which at present has resulted in a 1-1 record. A loss at Ansel and victory at Labyrinth Moors. Netzu is proud to say he Admiraled both blockades.

To ring in the new Year and to enjoy his 3rd year of piracy Netzu made the crew Imperium - Latin for Total Victory. Imperium is essentially a crew dedicated to attacking floatillas and to blockading, however the crew takes part in pillaging activities and is deeply entrenched in the hierachy of Oceanus Expeditus. Imperium newly formed in January 2008 is the first crew Netzu has captained in over a year.

Over the early months of 2008 Netz worked hard to establish his new crew, however he still found time to participate in any blockade that he was asked to participate in many of these being on Hunter for the flag Castigo X.

In early March 08 Labyrinth Moors was dropped on by The Flying Dutchmen in coalition with other Cobalt flags to rid the island of 100% taxes. Netz was not asked to organise a defense so instead he decided to drop a chest on Olive Island in retaliation to the coalition. OE lost both blockades outjobbed by more than 50% in both however they made far more contest of the Olive blockade.

Late March 08 Netzu had an argument with Morbuzaan, this provoked Netzu to leave Oceanus Expeditus and to change his crewname to Infitialis. He formed a new flag called Sub Rosa with a mind to spend time with good friends, unfotunatley this didn't work out and the flag quickly folded. Infitialis moved on to Megalomania.

On 5th May 2008 Malachite Ocean opened. Netzu chose to head over to these new waters. After trying in vain to start his own flag, Netzu moved the crew Sub Rosa to The Criminally Insane, after enjoying a period of activity in TCI and being a part of their blockades he left after being ex-communicated from flag business. Following this he moved his crew to The Usual Suspects.

Netzu returned to piracy as Hutch coming back to Cobalt in September 2009. Winning a Monkey familiar in the October Prize giveaways.

Netzu has navigated, admiraled or been a commanding officer in the following blockades: