A serpent on a pirate.

The serpent is a type of familiar. It was originally shrouded in mystery as the first mention of a new familiar was made in The Spyglass as part of the 2008 Halloween events [1]. The serpent wasn't revealed until the 11th of November, 2008 in a post in The Spyglass [2]. Serpents were officially released in-game on the 20th of November, 2008. The serpent (like the ippolito) may not be re-colored, but can be renamed like the other familiars.

The serpent has been spotted wrapped around several pirates' necks across the oceans. Before their release in November 2008, the pirates who won the raffles and tournaments of the 2008 Halloween festivities were awarded a pirate ticket and a crossed swords medal to represent the familiar. The serpents later awarded from the Halloween events were always the same two colors: indigo and white. The Spyglass article revealing the serpent also confirmed that these deadly familiars would be won in the future in Cursed Isles, like the ippolito in Atlantis. However, the serpent did not begin to be distributed that way until after release 2009-05-27. Since the release, pirates have begun to find the serpent in CI chests in varying color combinations.

Ocean Masters can create serpents in any color - and indeed several color combinations not shown below are owned by pirates on the Ice Ocean - but only the options below are winnable. The white/white serpent is only available as a prize for the Olympic Champions League.

Limited edition Serpents have been available from the following promotions:

Tan serpents were available from gold boxes and the Wine Box Promotion (2022). 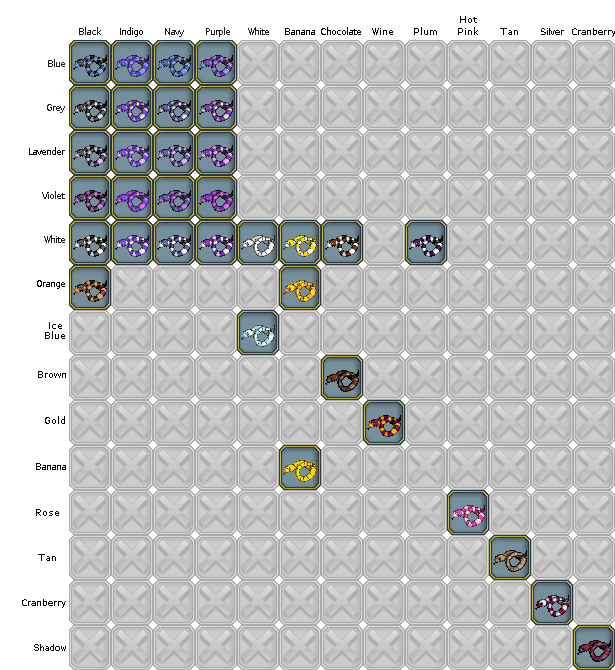