Ghosts are translucent beings found in various locations in YPP.

The Brigand King Barnabas the Pale sails with a crew of ghosts. This crew acts like any other NPC foe, except that they have different artwork.

Barnabas and his ghost crew are also found in the Haunted Seas. Here, though, ghosts can board the players ships and either be involved in swordfights, or sabotage the player's ship. In swordfights, the ghosts use a weapon that drops purple blocks that can be broken if any adjacent color block breaks. If not broken in time, these purple blocks become unbreakable black blocks. In addition to ship boarding, a number of ghosts equal to the number of players will be found in any ship graveyard in the Haunted Seas.

When a ship sinks in Haunted Seas, any player on that ship has a possibility of becoming a ghost. This is a temporary injury that only lasts until they log off.

Every Phantom class sloop and war frigate comes with its very own resident ghost NPP. The ghost is not counted as a swabbie on the sloop. The only interaction players may perform with the ghost is to ask it to move. As such, the ghost is purely decoration. 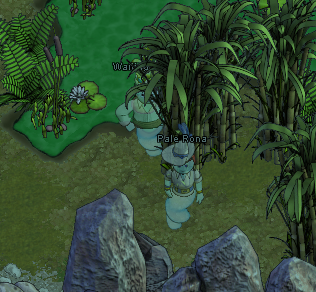 Ghosts help pirates find out where zombies and skellies are. 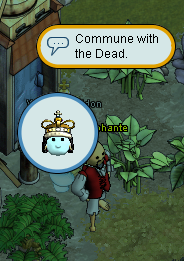 There is only one option on the ghost radial menu.

If there be any skellies or zombies about, a ghost will tell ye where.

If there be no skellies or zombies about, a ghost will say so.

Ghosts sense the unbalance of the ocean and will likely tell pirates where there may be a infestation of skellies or zombies. Unlike skellies and zombies, ghosts walk around, so pirates may have to search for them. There is only one option on a ghost's radial menu, which is Commune with the Dead. When this option is clicked on, the ghost will send a tell as to where there may be skellies or zombies.

For skeletons, the message will be one of the following: