The 2007 Halloween Events began on October 24th 2007. These were similar to those held in 2005 and 2006. This year, the main feature of the celebrations was the Ye Dread Dead: A Reanimation Miscalculation. A story detailing the events leading up to the Zombie invasion, The Case of the Comte de Froufrous, was released with the October newsletter. Team Competition. Halloween related items such as Halloween furniture and masks were made available again, and other items such as pumpkins, and zombie trinkets and trophies were introduced. 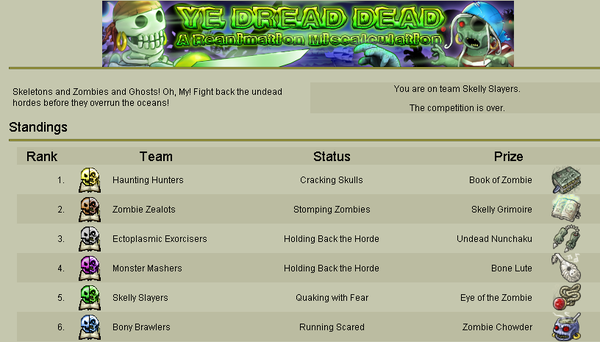 The noticeboard displaying which teams you are on

In this year's competition, pirates in all oceans were divided into six teams. Teams accumulated points by defeating skellies and zombies in swordfight or rumble brawls, respectively. At the end of the competition, each team member was awarded a trophy depending on the team's overall performance.

Non-player pirates in the form of ghosts, similar to the ghosts that pirates turned into during the 2006 Halloween events, randomly haunted islands for an undetermined period of time. Pirates could find out the current locations of skellies and zombies by clicking on the ghosts and selecting "Commune with the dead".

Trophies were awarded to the players who finished in each position