The different type of charts and maps

Charts (including inter-archipelago ones) can be wrapped; maps can not be wrapped.

The colors of league points described by charts or maps vary according to the type of chart or map, and whether or not the points have been memorized. For more information, see: league point.

Island charts may be bought at shipyards or shipyard stalls from the current island to any neighbouring island in the same archipelago. The price of these charts is believed to be relative to the measurable distance of the route [1]. Charts between islands with no shipyards on both sides (so that no charts can be bought, uncolonized islands also count) or between archipelagos must be pillaged from brigands, or bought privately from other players.

Forum threads to list rare charts for purchase or sale in each of the oceans can be found here:

In order for a ship to sail, a course must first be charted. This course goes from the current island or league point to the final island destination. For the course to be valid, the league points used must either be on a chart on the table, in the pirate's inventory, or memorized by the pirate doing the charting.

When maps are viewed in Yer known world or the navigation table, the route difficulty of the route is indicated by shading — the darker the league point, the more dangerous the waters.

Sea Monster Hunt maps are (as of June 2014) the only way that a ship can gain access to one of the four Sea Monster Hunt voyage types: Atlantis, the Cursed Isles, the Haunted Seas, and the Kraken lair. These maps can be won in pillaging battles, from chart boxes, from black boxes (on rare occasion), and one person will always win one from a fray with skellies, zombies, or werewolves.

To use the map to chart its course, it must be placed on the chart table of a ship to which the map owner has access. Atlantis, the Cursed Isles, and the Haunted Seas put the ship at risk of sinking, so to travel to these destinations the ship's lock must be set to "battle ready" if the officer who is charting does not hold the deed. The officer may then chart a course to the location shown on the map. After a course has been charted in this way, the vessel can be configured for "Sea Monster Hunting". This causes any jobs posted to the notice board to reflect the intent of the voyage.

The map cannot be removed from the vessel while a ship is charted to a Sea Monster Hunt location, or while the ship is at the location itself. If a vessel is sunk during a Sea Monster Hunt, then the map is lost along with the ship.

Sea Monster Hunt maps have a decay rate of eight (8) days. Unlike most items, they decay in eight calendar days, not login days.

It should be noted that Sea Monster Hunt destinations exist for only a set period of time, which is why these maps always decay based on calendar days and can not be wrapped.

An expedition map allows an officer to chart a course to an expedition.

All expedition maps decay in calendar days. Explorers' hall maps age according to how long they have been on display before being bought. This means that maps purchasable from halls may have fewer days remaining than if they were obtained by other means (e.g. black boxes).

Compasses decay in up to three (3) calendar days. 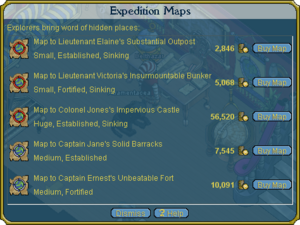 Examples of Imperial outpost maps in the 'Buy Charts' screen of the Explorers' hall.

Imperial outpost maps are acquired from an explorers' hall, and are available in different types which correspond to difficulties and payout levels. Maps decay in three calendar days from the time they show up in the shop and reduce in price until they are purchased as they decay. They come with three different variables:

Imperial outpost maps decay in up to three (3) calendar days.

For more information on which maps are best for a given situation, see: Imperial outpost

Viking raid maps are acquired from an explorers' hall, and are available in different types which correspond to difficulties and payout levels. Maps decay in three calendar days from the time they show up in the shop and reduce in price until they are purchased as they decay. They come with three different variables:

Viking raid maps decay in up to three (3) calendar days.

For more information on which maps are best for a given situation, see: Viking raid