For the ocean-specific newsgroups within the Forums for player-to-player transactions, see The Bazaar.

A bazaar is a building with many stalls of the same type. On a medium or large island, a bazaar must be placed before a shoppe of that kind can. The entrance to the bazaar is a room which allows any pirate to comparison shop across the island for the goods produced by the stalls in the bazaar (both stalls and shoppes). There is also a desk which allows pirates to open their own stall. From the entry room, one can choose to enter any of the stalls in the bazaar. On subscription oceans, non-subscribers cannot open a stall, or change the size of a stall they may already have.

Construction cost, stall storage capacity, and paint requirements information can be found on the page for each bazaar type.

The deed to a bazaar building changes with the governance of an island. Each time the island is taken in a blockade or the governorship is changed by a royalty vote, all infrastructure deeds, including the bazaar deeds, are automatically transferred over to the new governor. Governors often hand these deeds out to flag mates or friends, either with specific purposes in mind or as vanity gifts. The bazaar building itself requires no rent or tax payment.

Possessing the deed to the bazaar building confers no special privileges or powers, nor does it generate any income. The only abilities granted the deed-holder are the power to change the news in and to decorate the front room with paint and furniture. Some bazaar holders use this ability to create an advertising space in the main lobby news. Note that bazaars themselves have no hold, so paint must be purchased automatically via the paint brush. 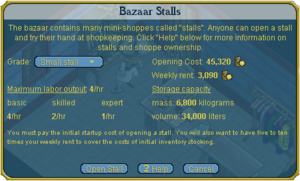 Interface for opening a bazaar stall.

Anyone can open their own stall in a bazaar with some amount of PoE, which is determined by the type of stall, the population of the island, and the island's tax rate. On subscription oceans, a pirate must be a subscriber to open a stall. On doubloon oceans, an additional 10 doubloons are required to open a stall.

A pirate can open only one stall in each bazaar, but there are no other limits to how many stalls one can open. Stalls do not have deeds and cannot be transferred from one player to another. The fee to open a stall is an intentional barrier to entry, and raising that fee with a plan to recoup the investment is regarded as the first test of a successful stallkeeper. 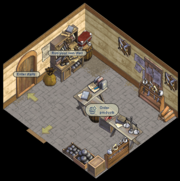 All bazaars have an entry room from which pirates can place orders, rent a stall, or visit other pirates' stalls

Stalls require a weekly tax to be paid as rent. This amount can be paid in advance by clicking on a button in the "Shoppe" tab, where the due date and amount of the next payment are displayed. If the tax is not paid by the due date, it will be automatically withdrawn from the coffers. If the coffers do not have enough to cover the fee, the stall is closed and cannot do business until the tax is paid. This is indicated by the stall being "dark" inside. If there are unstarted orders in the queue, they are all canceled and all of the PoE that was in escrow for them is refunded to the purchaser (the 15% restocking fee does not apply).

If the tax is not paid by two weeks after the due date, the stall will be closed permanently and all commodities and PoE in its coffers confiscated as payment. Any orders in the queue which were partially worked on but not completed will have any remaining PoE in escrow refunded to the customer (can happen while the pirate is offline), while any orders which were completed but not collected by the customer will be lost without compensation. Any clothes on the rack for deluxe tailor stalls will be lost as well, though any furniture added to the stall will be returned to the item's owner when the stall shuts down.

Stalls can be upgraded or downgraded at any time from the main bazaar. This will result in one week's worth of rent at the new level being deducted from the coffers and the tax day set to the current day of the week. If the taxes have already been prepaid, the rent difference between the current level and the new level will be paid if upgrading (if downgrading, there will be no refund). In both cases, the standard number of props for a stall of that kind are gained, but any paint jobs previously applied are retained. Note: On subscription oceans, a pirate must be subscribed to change the size of a stall they own.

If a stall is upgraded or downgraded while a pirate is working on labour, they will be automatically ejected from the puzzle and sent to the appropriate bazaar.

If a stall is downgraded and has more managers than the new size allows, the managers who do not fit remain on the list, but are essentially invisible. They will not be able to manage unless the stall is returned to a size that has enough manager slots. However, managers removed by this will be immediately restored (since they were never actually removed) in that event, so it is advisable to check managers after upgrading a stall that was previously downgraded, to avoid theft.

Reserve labor for each stall

Reserve labor is calculated using a factor of 8 (factor of 2 for tailors) for maximum labor throughput.

Bazaars were added to the game for release 2004-04-28, which also introduced comparison shopping.

Originally, starting a stall required various commodities as well as PoE, but that was changed in release 2005-02-11, shortly after merchant brigands were introduced.

Non-subscribers were prevented from opening or changing the size of stalls in release 2005-11-23.

The deeds to bazaars themselves were made untradeable (along with all other government buildings) in release 2006-03-30.