A league point to a Kraken lair. Its gray color signifies a non-sinking environment.

The Kraken is a type of Sea Monster Hunt where pirates smuggle out valuable treasure chests - including the fabled Kraken's eggs - and kraken's ink out of the treasure hoard of a monstrous Kraken, all the while facing the full wrath of its myriad defending tentacles.

The Kraken encounter was first released in the Ice Ocean in June 2014 for testing, and then released on the production oceans at the end of July 2014.

Like other Sea Monster Hunts, players will join a sea battle board upon entering the lair. However, unlike other Sea Monster Hunts, each player aboard the vessel will navigate the board in his or her own one-person rowboat. Pirates are not required to own a rowboat kit in order to pilot a rowboat, but will be able to choose to pilot an upgraded rowboat if they do own one.

Unlike other Sea Monster Hunts, Kraken lairs are non-sinking environments. They can only be approached by the following vessels: sloop, cutter, dhow, fanchuan, longship, baghlah, and junk (theories suggest that these vessels are small enough to evade detection by the Kraken; any larger, and the Kraken would immediately sink the entire vessel).

Though the Kraken lair is a non-sinking environment, a vessel must be unlocked to battle ready in order to participate.

Pirates must either be subscribed or have a bravery badge to participate in Kraken hunts.

Signs of a Kraken being introduced to the game were first sighted in April 2012, when the developer Eightycats posed the not-so-rhetorical question "Have ye ever seen a Kraken?" and later in November, Eurydice posted a screenshot of a wireframe model and 3D renderings of Kraken tentacles, describing it as a "work-in-progress".

Much later, on May 23, 2014 on the Ice Ocean, a player found a special map after winning a sea battle.[1] It was later confirmed by an Ocean Master to be a piece of content that shouldn't have been released yet.[2] The Kraken lairs were then officially enabled in the test ocean on June 6.

After almost two months of testing, with Ice players receiving maps and rowboat kits from tournaments, the Kraken lair was released to the production oceans on July 29.[3]

A map to a Kraken lair

To enter a Kraken lair, a player must acquire a special map. After placing the map on the vessel's navigation table, the player may set the course to a unique league point that cannot be memorized. After setting the course, the map is locked to the vessel's table.

In order to join the encounter, the vessel must have aboard the appropriate amount of lifeboats, a special commodity produced on shipyards. A single lifeboat will be consumed per pirate aboard when joining.

Any officer with rights aboard the vessel or an jobbing pirate with the navigation order from an officer can disengage from the encounter if he/she is at the safe zone. Leaving the board before the 30 minutes limit won't refund any used lifeboats, but all acquired treasure will be brought back aboard. Upon reentering, a new board will be generated. 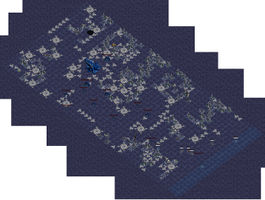 An assault on a kraken lair commences.

Players entering a Kraken lair board will notice that, instead of a single vessel joining, there will be one rowboat for each pirate that was aboard that vessel. Unlike flotillas or other Sea Monster Hunts, pirates won't need to play duty puzzles while the officer in charge battles. Instead, each player controls his own boat, therefore each player may choose where to go and what to do. This makes communication and organization crucial in order for players to acquire as much booty as possible. Since turns are shorter than in other sea battles, players must think fast and be careful with teammates.

Each rowboat functions as its own vessel, automatically receiving new movement tokens every turn. The chum, harpoon, and powder boats also automatically generate shot tokens. Since there are no other pirates helping alongside, any damage taken can't be repaired, no bilge ever comes into play, and no maneuver tokens are ever produced. Boats take no damage when bumping each other, but powder kegs are still lethal.

Players are limited to 30-minute sessions, during which they must try to navigate the board and try to acquire as much ink, chest and eggs as possible. To grab any ink or chest, a player can simply row above a tile that contains the item (not needing to stop above it).

Chests and eggs are found scattered on the board, with cuttle boxes (less valuable) nearer the entry and eggs (most valuable) furthest. These treasures are usually hidden behind rocks, whirlpools and lots of winds, creating a maze of sorts that the players must solve in order to grab the chests.

Kraken's ink, on the other hand, can be acquired either by shooting tentacles with a harpoon (from the harpoon kit), or by harming the Kraken head, either with a harpoon or with a powder keg (killing a tentacle with a keg won't net any ink). Ink also randomly spawns on the board in areas close to the Kraken head.

Rowboat kits are special items automatically used when joining the Kraken lair. They are a special kind of item produced by furnishers that shows on the player's booty panel. Upon entering, the player will enter with the kit that he has equipped. Each kit lasts for 15 login days.

Different classes of boats have different stats, abilities and amount of treasure they can carry. For example, the Speed Boat is the only one that can move four tiles per turn, but is also the most fragile one. On the other hand, the Bumper Boat can move three tiles, but is the most resistant class.

Example of rowboat kits in a pirate's booty

The following are the relative damage outputs from each possible damage source:

The following table lists the number of times that each max damage classification can withstand before the rowboat sinks. These values assume that the only source of damage taken is that listed in their respective columns. Values of 0 indicate that the rowboat will sink after being struck once.

* Rowboat will sink at this point.
**Bumping the Kraken's head causes the same damage as a rock bump.

Alternatively, one may consider the percentage of one's health that is drained from touching one of each damage source:

If a player does not own any kits (or doesn't have any equipped) when joining the board, he will enter with the default simple rowboat. Players can decide which boat class they will change to after sinking or going back to the safe zone based on the kits they currently have. 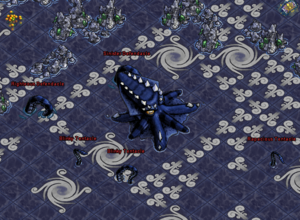 The Kraken's head, surrounded by winds and protected by its Defendacles.

At the center of the board, players will find the Kraken's head, defended by a maze of winds, whirlpools and tentacles. The creature's head is immobile, and will stay in its spot for the entire encounter. Alongside the head, there will always be two Defendacles, which will try and stop any boat from getting near the head. Defendacles will always remain near the head, though they'll occasionally follow a rowboat half a dozen spaces from the head before returning. Also, defendacles are the only tentacles that can move backwards; regular tentacles move as boats do, either forward, right, or left.

Although the main objective of the players is to haul chests and eggs, they will find themselves in a rough situation if they don't deal with the creature itself. By attacking the head with a keg from the Powder Boat, players can force the Kraken to go back to the depths, along with his tentacles, essentially clearing the board from enemies for a few turns.

After two turns of safety, the tentacles will reappear. One turn after that and the Defendacles will spawn nearby the head's location. Finally, on the fifth turn after sinking it, the head will reappear in the same place. During its move back to the surface, the Kraken will create a giant wave, sinking any boat in its vicinity. At no point is the head immune to damage, meaning players can sink it again as soon as it appears.

Hitting the Kraken's head with a harpoon will make it spill several spots of ink on the board, but it won't kill it. 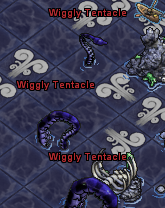 A trio of Wiggly tentacles, one of each size.

As soon as the players join the board, tentacles will spawn around the map. They come in three sizes, all of them smaller than the Defendacles. They are not rational beings, so their movement pattern is very simple. Whenever a boat approaches one, it will chase it and try to sink it, but will leave it alone and go back to its own area if the boat goes too far away.[4] Due to its aggressive nature, it's not uncommon to see clusters of tentacles in choke points, after a boat has gone through.

Tentacles don't have ranged attacks, with the smaller versions being the only kind which can "swat" enemy boats to deal damage, while all other sizes can only bump into them. Most boats will die in a few hits, with the Speedboat being the most fragile, dying to a single one.

These enemies take no damage from collision with rocks and other tentacles, and have a high resistance against harpoons and bumps on boats. The most efficient way to kill them is by using powder kegs, which will kill them with a single explosion. They are also very fond of meat, and so can be baited with chum, which they will consume as soon as they pass through it.

Tentacles spawn in groups of between one and three tentacle segments, with all of those in the same group sharing an adjective. When a tentacle is bombed, all the larger tentacles from the same group will submerge with it; any smaller tentacles remain on the board. The sunken tentacles rise again after a few turns.

Items and Pieces of Eight are given out in the obtained treasure chests. There are four kinds of treasure chests that can be raided from the Kraken. In order of increasing value and difficulty to obtain, they are:

Certain clothing items, trinkets, furniture items, and familiars can only be obtained during a Kraken encounter.

In addition to being able to obtain numerous standard clothing items in the Kraken-exclusive color, inky, two types of Kraken-exclusive hats are given out as prize items from the hauled treasure chests, one male and one female. These are just a few examples. It is also possible to win an inky chroma, which may be used to change a single color on a single item of clothing to inky. Black chromas can also be won, but are not exclusive to Kraken lairs.

A Krakling familiar perched on a pirate.

As of release, pirates can obtain two familiars: a black Octopus, and a special type of familiar known as a Krakling. Both familiars are found in the Kraken lairs, and pirates can receive either during booty division of eggs. Kraklings are available in the following 10 colors: grey, violet, purple, navy, blue, aqua, lime, green, light green and inky. The black octopus is the second all-black familiar obtainable by pirates, the first being the Ippolito.

Certain Kraken themed furniture items can only be obtained from treasure chests in the Kraken lair.

The following trophies are specifically related to the Kraken's lair:

Similarly to other Sea Monster Hunts, chests brought aboard the vessel are divided amongst all who joined the encounter. The crew's restock cut still applies to a Kraken lair expedition.

Since the Kraken's ink is a commodity, any unit collected will be found in the vessel's booty chest, to be sold before division or moved by the division into the vessel's hold, for later disposal by a qualified officer.