Imperial outposts are a type of expedition accessed using maps purchased at an explorers' hall. The map leads to a tiny outpost at a league point, which is denoted with a crown icon in the ocean view. These outposts are only visible to the ship which holds the map to the outpost. The outposts are guarded by an Imperial ship and troops; after an Imperial ship is sunk during a sea battle, a swordfight takes place on the outpost. If the pirates win the swordfight, PoE, cannon balls and grog are placed in the ship's hold. 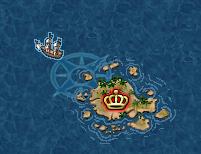 Pirates everywhere are encouraged to head to an explorers' hall to obtain the expedition maps needed to harry and plunder these accursed Imperial outposts and ensure that free piracy will reign throughout the ocean.

To reach an outpost, an officer must chart a route to a destination island such that the ship passes through the outpost league point during its journey. The map to the outpost must also be placed on the navigation table for the expedition to become active. These two steps can be completed in either order. Note that the map only includes league points which lead to the outpost, and does not necessarily contain the league points needed to chart to a destination island. Therefore officers may use the map league points to aid charting, but cannot necessarily chart a course to the outpost using the map alone (this would only be possible if an outpost were situated one league away from an adjacent island).

Once the route is charted, the Imperial outpost map will appear as an expedition in the ahoy panel of the sunshine widget, allowing officers with the correct permissions to order the attack when the league point is reached. The outpost will appear on an existing league point, and will only be visible to pirates with a map to that outpost. Once the league point has been reached, officers may select the "Attack" option which appears on the ahoy panel. Clicking this will cause the ship to enter a small sea battle board, where it will face an Imperial ship. After having sunk the Imperial ship, the attackers will disembark onto the atoll and the Imperial troops will initiate a fray. All of the troops carry identical swords, but the sword type appears to be random.

Imperial outposts come in four different sizes (small, medium, large and huge), three different fortification levels (fledgling, established and fortified), and either sinking (indicated by a red-highlighted map and marked on the map in brackets as "sinking") or non-sinking (indicated by a gray-highlighted map). A map to an Imperial outpost indicates what combination of features it has. All Imperial outpost maps decay in 3 days and are destroyed after a successful expedition. Maps will remain on the ship's charting table after an unsuccessful expedition, unless the ship in question was sunk during the attack (in which case the map is lost forever).

For all types of outpost, losing either the sea battle or the swordfight will cause the entire expedition to reset, and pirates must try again from the start. When this happens, the imperial ship will respawn if defeated, and any damage done to the ship previously will be discarded.

The types of Imperial ships guarding an outpost depend upon its size, similarly the difficulty level of the defending ship increases with the rating of the outpost. For example, the defending sloop in a fledgling island is easier to sink than on an established island, and so forth. Based on this information, the following ships are suggested to mount an expedition against an Imperial outpost:

*Ships that take less damage than the defending ship. These can be used in Imperial ouposts, but take an exceptionally well-staffed ship to be succesfull.

When a ship sinks the enemy vessel guarding the Imperial outpost and the crew on board have defeated the soldiers of the tyrannical Empire, they will be rewarded with PoE, cannon balls, and grog. These are immediately placed in the ship's booty and a small portion will be put in the hold for the officer in charge.

The below figures are based on players' observations only and may not be accurate. Players can update the data below if they have received a payout that exceeds one of the maximums listed.

Imperial outpost trinkets are awarded to some experienced pirates, randomly chosen from those aboard the ship, when they defeat the soldiers in the swordfight. To count as experienced, the pirate must either possess a pirate badge or higher if it is a doubloon ocean, or must have an active subscription when on a subscriber ocean. One trinket is distributed for each Imperial, so if there are more pirates than Imperials aboard the ship, not all of the pirates will obtain a trinket. All pirates are awarded the exact same trinket, with the color of the trinkets awarded being determined by the colors of the Imperial Navy's uniform. Trinkets can be exchanged for various items via a trading post.

The following trophies are available only from Imperial outposts: