Haunted Seas (often abbreviated as HS) are outposts inhabited by ghostly ships, led by the Brigand King Barnabas the Pale.

Voyages to the Haunted Seas are a form of sea monster hunt, similar to Cursed Isles and Atlantis, but there are various differences. Boarding battles are swordfights, ghostly enemy ships are able to move through rocks, and treasure may be obtained from sinking and hauling such ships, as well as from defeating shipwreck graveyard and then hauling the resultant wreckage.

All battles which take place on Haunted Seas are sinking. Everyone on board the ship must either have a bravery badge or be subscribed for the vessel to set sail.

Maps to the Haunted Seas are similar to Atlantis maps, which are in the form of special charts (as seen to the left). Haunted Seas maps are obtainable from pillaging battles, black boxes, and encounters with skellies, zombies, and werewolves. They can be traded between players as normal. They mark a route between an island and a unique league point, which are similar to flotilla league point markers, except that they cannot be memorized. To chart a course to a Haunted Sea, the map must be placed on the ship's navigation table. Maps are "locked" to the navigation table while a route is charted to a Haunted Sea league point.

If the vessel is sunk while in the Haunted Sea, the map is lost with it. 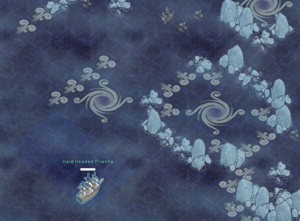 The sea battle board for a Haunted Sea is much darker than usual, similar to a Cursed Isle, with a fog covering most of the board. The board itself has the usual elements of whirlpools and rocks, as found in normal sea battle boards. Extra additions include pieces of destroyed land, ghostly ruins and shipwreck graveyards, which are similar to Atlantis citadels.

Enemy ships found in the Haunted Sea are known as the Ghost Fleet.

There are three types of vessel:

Vessels of the ghost fleet have half the damage capacity of their earthly counterparts. However, due to constant repairing of the vessels by their crews, the minimum damage to sink is often higher; listed in parenthesis is the actual minimum amount of cannonballs required to sink each ghostly vessel, assuming an uninterrupted chain of shots hitting the vessel.

Although these vessels are weaker in hull strength than their original counterparts, they retain the same shot capacity and damage as their living counterparts, and thus should not be underestimated. Of the many maneuvers available to players, ghost ships are only capable of performing Chain Shots; the fleet will make liberal use of this special shot however, often causing player ships to be devoid of movement tokens when caught in a swarm of ghost ships.

In addition, vessels of the ghost fleet are capable of sailing through rocks and other map obstacles, including tiles occupied by the ship graveyard. When one of these vessels passes into a tile that shares space with a rock, shots fired at it will hit the ship rather than the rock.

Each of these ships has a rank in the form of a prefix which denotes the general ferocity and skill of its crew. Ghost ships with more skilled crews repair faster and are capable of moving and firing more often than their less-skilled comrades. Listed on the official page, these ranks are, from easiest to hardest, Ethereal, Phantasmal, Frightful, and Spectral. However, Phantasmal ships have not yet been witnessed on production oceans.

Ethereal, Frightful, and Spectral ships each sail separately from each other in a specific region of the navigation board. Ethereal ships sail in the "shallows", along the bottom-right section of the board, and Spectral ships sail in the "deep end", along the top-left section of the board, while Frightful ships sail in the region between these two. Higher-ranked zones will have more numerous and larger ships than lower-ranked zones. In general, ghost ships will only engage player vessels that have entered into their zone of the board and will give up pursuit of such vessels upon their departure of the zone, however enemy ships have been known to sometimes continue pursuing trespassing player vessels far out of the vicinity of their zones.

Although rare in comparison to other Sea Monster Hunts, chests from the wreckage of ghost ships are more common than those from the remains of ship graveyards. Conversely, ship graveyards provide more PoE than may be hauled in the same amount of time from the wreckage of ghost ships. Thus, a player ship may choose to focus on either sinking and hauling vessels of the ghost fleet or defeating and hauling ship graveyards, depending on whether the crew desires to focus on chests or PoE, respectively. Crews seeking both treasures are recommended to perform both activities.

Ghost vessels will attempt to avoid being positioned, at any phase of their move, in such a manner that their bow faces outwards into the backwall or frontwall of the board. Ghost ships caught in this position often will remain in such a position and orientation until they are sunk, however it has been observed that such ships will rarely sometimes become "unstuck" of their own volition. This behavior is only observed at the front and back walls, and ships near two side walls (where the safe zones are located) will not hesitate to sail into these edges and will not become "stuck".

While sailing the Haunted Seas, on occasion boarders, colloquially known as phantasms, will come aboard. From easiest to hardest difficulties, these boarders are phantasms, frights, and specters.

The following message is displayed when phantasms board the vessel:

In the same manner as dragoons in Atlantis, phantasms will challenge players to individual swordfight duels. During this time, the boarders will be listed as "challenging" and can not be fought in a group fray. Challenges will appear in a player's Ahoy! panel and can be either accepted or dismissed.

Phantasms that are successfully defeated in an individual duel will be driven off the ship. If a duel is not accepted in time or declined, phantasms will seek another player opponent and if they have not found a willing opponent after some time or have defeated their player opponent, will turn to sabotaging duty stations, reducing the effectiveness those stations. At this point, the boarders will be listed as "battle-ready" and can be engaged in a group swordfight fray. A Master at Arms (MAA) will need to organize volunteers for this fray.

If the number of phantasms reaches the number of players aboard the ship, a ship-wide take-over fray will be initiated. If the aggressors are not defeated in this fray, the ship and its contents will be taken-over and sunk. 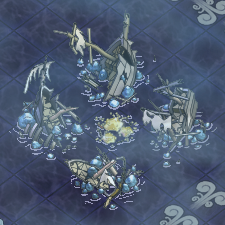 A single ship graveyard, containing massive amounts of pieces of eight and a few chests, will periodically appear on the board, lasting 25 turns, including the turn that it first appears. There can only be one ship graveyard present on the board at any time.

Each graveyard will spawn with an ethereal brig and ethereal sloop escort, which may potentially create peculiar situations in which ethereal brigs and sloops appear in frightful and spectral zones.

Graveyards can appear on tiles already occupied by treasure haul spots left behind by sunken ships and even previous graveyards. Although hidden by the graveyard, these haul spots are not destroyed and can even be hauled with the graveyard on top of them.

The graveyard may be entered from four directions and traveling to the center of the graveyard will trigger a scene-change to the dilapidated deck of a shipwreck at which point ensues a ship-wide swordfight fray against its ghostly defenders. Note that this scene-change will reset the puzzling performance of the ship's crew, regardless of whether or not a break occurs when inside the graveyard.

Sail tokens are preserved while fighting in the ship graveyard. They do not decay and the ship will have as many sail tokens it had on exit as it had upon entry. Thus, it is advisable that the navigator accumulate a few sail tokens before entering the graveyard, as it may be necessary to avoid enemy ships immediately upon the conclusion of the graveyard fray.

The number of defending phantasms present normally matches how many players and swabbies are on board the attacking vessel. However, a few graveyards have been known to have a couple extra enemies.

Most of the foes fought are ghost equivalents of the pirates on the player vessel; however, Barnabas the Pale himself may occasionally also appear to defend his ghostly treasure stash. Regular boarders, if present, will also participate in the fray, replacing the ghost equivalents of some pirates.

Linklord and his ghost equivalent

All phantasms are equipped with spectral swords. Barnabas continues to use his skull dagger as seen on Brigand King expeditions.

As an extra challenge, a new purple piece is added when swordfighting in a Haunted Sea. If the piece is not broken after five pieces dropped, the piece turns dark grey and cannot be broken. These are the same pieces that can be seen when taking damage from brigands when pillaging. The purple piece can be broken with any color breaker, or breaks when surrounding pieces around it break. 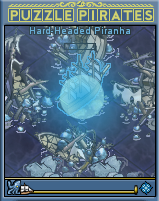 In place of the graveyard, four sunken ship corpses - unique in appearance compared to regular ship corpses - will then appear on the tiles catty-corner to the ship and the crew may then treasure haul Barnabas' treasure.

The following message is also displayed:

Once hauling is complete, the battle navigator can then choose to either leave, or travel to another graveyard.

If the assault on the graveyard is not successful, the crew is returned to their ship, and on the next turn, the graveyard will simply disappear with no aura blast emitted and no treasure spots left behind.

Certain clothing items, trinkets, furniture items, and injuries can only be obtained during an attack on the Haunted Seas.

Night blue is an exclusive colour to Haunted Seas. Clothing items in night blue can be obtained from Haunted Seas chests during the booty division. It is also possible to win a night blue chroma, which may be used to change a single color on a single item of clothing to night blue.

If a ship a pirate is on is sunk while in the Haunted Seas, there is a chance that character may temporarily become a ghost upon reaching land. This temporary injury disappears once the pirate has logged off and on again. Obtaining this "injury" precludes the possibility of obtaining a permanent injury or a fish.

The first known ghostling familiar was won by Hagriad on February 6, 2011. Ghostlings do not come in different colors.

Rare, semi-transparent ghost pets were introduced with the Haunted Seas, and are only found there. Pirates may receive one from the chests during the booty division. There are four types: the ghost rat, ghost cat, ghost small dog, and ghost hedgehog. The first ghost rat was won on the Cobalt Ocean on August 29, 2010 - like normal rats, they may not be traded. The first ghost cat was found on the Sage Ocean on August 28, 2010, while the first ghost small dog was found on the Sage Ocean on Feburary 15, 2011.

Haunted Seas-themed trinkets and other standard trinkets are available from treasure chests.

The following trophies are specifically related to Haunted Seas: