The notice board is where a pirate can access a list of crews hiring jobbers, the news, events and parties posted for the island, a list of featured shoppe jobs, their missions, and the information on any recent blockades on the ocean.

The notice board can be accessed by finding it on an island, the island minimap, the New Pirate Help panel, or the Ye tab. If accessed from on board a ship, only the news, puzzle, missions and events tabs are visible.

When an island is colonized, notice boards do not show up automatically, they can only be placed by submitting a petition requesting one.

From the "News" tab, a pirate can view a list of recent in-game articles of importance, new releases, and is also shown one of the free puzzles of the day.

The "Puzzles" tab shows the pirate a list of symbols representing each puzzle. Puzzles unavailable to the pirate - if, for example, they don't have the appropriate badge - are greyed out. Clicking on a puzzle displays a short blurb or helpful tip about the puzzle, and a "Play Now" button which automatically whisks the pirate to a location where they can perform that puzzle (or, if the puzzle is unavailable, a button allowing the pirate to purchase the required badge or subscribe).

The "Missions" tab gives the pirate a list of missions they can complete, which missions are on that list vary from pirate to pirate, including introductions and navy missions. Some pirates with swordfighing stats at a certain level (narrow experience and renowned standing respectively) will see a "Defeat the skellies!" mission. Similarly, pirates with these stats in Rumble will see a "Defeat the Zombies!" mission.

The "Voyages" tab displays a list of ships at sea (if any) that are hiring jobbers for various voyages. All voyages show the ship, crew, and officer name (with clickable links to /vwho, crew, and pirate info pages respectively), and a button to apply. Pirates may also "auto-apply" to voyage types of their choosing.

In addition to pillaging, this tab on the notice board is also used to post jobbing notices for general jobbing within a crew, blockades, flotillas, trading, foraging, greeter pillages, evading enemies, and sea monster hunting (Atlantean outpost, cursed isle, or haunted seas). Each type of voyage may have other columns specific to its purpose, and many may be moused-over for more information.

The "Events" tab holds the current news from the governor, upcoming events, and any parties. It also lists some current forum events. Additionally, any Ocean Master can create a whisk to any scene as part of an event, the whisk shows up on any notice board. 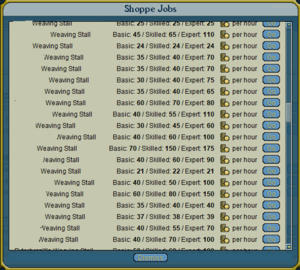 The "Shoppe Jobs" tab holds a list of some shoppes needing labor and their respective pays. Clicking the "Go" button which appears next to each job will whisk a pirate to the shoppe in question. (Note: To see this tab, one must be a subscriber on subscriber oceans.)

Clicking the "View" button will bring up a user interface in which pirates are able to view all open job offers on the current island, and instantly whisk to a selected stall or shoppe. This was introduced in release 2017-12-01.

The "Blockades" tab shows any current and upcoming blockades, along with the current score (if the blockade is live). The Blockade tab also shows if an island is eligible to be blockaded, and how much it would cost to drop a war chest and have a flag attempt to take over that island.

On the Obsidian Ocean, the war tab keeps an overview of statistics on the perpetual struggle between the two factions, Shadow Fleet and Defiant Armada.

The "Competition!" tab is only viewable during certain Team competitions. It shows which team the enquiring pirate is on, whether or not that pirate has participated, and team rankings.
See: Zombie Apocalypse and Fight Club for examples of past competitions.

In release 2017-12-01, the Shoppe Jobs tab was overhauled to show, after clicking "View", all the open job offers for the appropriate puzzle. Prior to that, it would show a random selection of 3 job offers. It still does this, but you can now view all the existing job offers on the island.

In release 2009-12-18 the Voyages tab was overhauled to show tables with sortable columns for each of the various voyage types, instead of a giant description text.