A pillage (or 'pilly' as it is known among players) is a voyage aboard a ship with the intent of attacking brigands and/or other players who are pillaging and earning PoE. This is arguably the most common form of earning PoE in the game.

The commanding officer (also occasionally called the captain, not to be confused with the role of captain within a crew) of the ship (often the most senior officer on board) charts a course between two islands. This can either stay inside the current archipelago, or use an inter-archipelago chart in order to go from one archipelago to another. If the commanding officer deems enough pirates to be on board, he or she will hit the "Set Sail" button, and the pillage will commence. It is important to note that when the ship is sailing on the ocean, it is able to be attacked. The vessel can be attacked either by computer-generated brigands, barbarians, or other players in a player versus player (PvP) battle.

Hiring jobbers is ordinarily done on most pillages. The option is available to officers on an unlocked ship to post a notice for jobbers. This will add a line to the notice board jobbing section, indicating the crew name, ship name, type of ship, and the current booty shares. Pirates apply for jobs aboard ships in order to assist on the pillage and hopefully add to the success of it, winning PoE from brigands and players along the way. 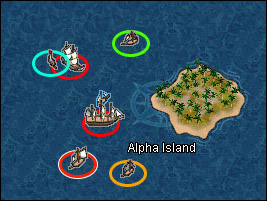 Might rings can be any color from blue to red.

Nonplayer ships bear icons indicating whether they are brigands or barbarians.

Booty Plundered in the Ahoy! panel.

The commanding officer on board the ship can use the radar in order to scan the ocean for other ships in the vicinity. These ships will appear different colors, ranging from dark blue through green to dark red. The color of the icon on the radar denotes the relative strength (might rating) of the other ship in relation to the CO's, with blue being the weakest and red being the strongest. Once the CO has identified a potential target, he or she will switch from the radar view to the crow's nest in order to see the exact configuration and status of the ship. In this view, the CO will see the might ring of the opposing vessel as it approaches. The ring is an indicator of the number of pirates aboard that ship, and their ability.

Ships that would be encountered on a regular pillage are piloted either by other players (producing PvP action) or are computer-driven, either as brigands, merchants, or barbarians. Any ship can be attacked (except for navy ships), but the CO should beware: if he or she attacks a ship which is too far on the blue side of the might scale, the CO runs the risk of being attacked by El Pollo Diablo! Attacking a ship too far to the red side of the scale runs the risk of the CO's opponents being too strong for his or her vessel, and taking some of his or her ship's booty.

Having selected an appropriate target, the commanding officer would hit the "Attack!" button on the "Vessel" interface, and would then attempt to catch the other ship. It can require great timing in order to successfully catch another vessel.

If the CO is successful in capturing another vessel, or indeed, if a brigand or player-run ship catches his or her own, a sea battle will commence. The duty navigation puzzle is replaced by the battle navigation puzzle, a large grid of squares, upon which will be shown icons denoting the CO's ship, the opponent, and various rocks, whirlpools and winds. The basic object of the battle navigation puzzle is to shoot the opposing ship as many times as possible with the vessel's cannon balls whilst avoiding getting shot in return. Once the CO feels that he or she has shot the other ship enough, he or she will move the ship into position for a grapple to take place. Once that has happened, a group swordfight (in the case of brigands or merchants) or rumble (in the case of barbarians) takes place, similar to a mass brawl. The winning side takes a percentage of the cargo that the losing side is carrying, along with a percentage of the PoE in the hold of the vessel. With brigands, there is normally a great deal of PoE to be won. With PvP, there may not be as much to win, because player ships generally don't carry as much in terms of assets as the brigands. Kraken's blood only enters the economy from defeating brigands.

All of the goods and one half (50%) of the PoE won in the battle go into the booty chest. The remaining pieces of eight are divided instantly among the crew according to the crew's booty shares.

At the end of the pillage, upon porting at the destination island, the CO goes to the booty chest and divides the booty. The server calculates how much each pirate on board has earned based on the number of battles in which they fought. The booty is divided based on the booty shares of the crew at the time. Even pirates who left the vessel in the middle of a pillage are included in the division. The CO will check that the amounts given to each pirate are fair, and he or she has the power to change to a certain degree the amounts awarded if he or she feels that some pirates have made more (or less) of a contribution than others. If the CO sells the commodities straight from the booty, the profits will be added to the total booty. However, if the CO divides the booty without selling commodities, they will go straight to the ship's hold upon division.

After dividing the booty, it is considered good practice to restock the ship with enough rum and shot for the next pillaging trip, so that the next officer on board does not have to pay out for those things. Crews will have their own policies for what happens to the remainder of the ship restocking cut after the rum and shot have been bought. Officers are also allowed to sell or transfer any extra commodities they don't need. Officers who sell commodities to stall and shoppe owners play an important part in the economy. If rum is not carried aboard the vessel, rum sickness will take hold. Additionally, neglecting to restock cannon balls will mean that ships will not be able to defend themselves in battle. Many crews hold the view that pirates should always restock a vessel after having sailed it. It is common for vessel owners to state preferred stocking quantities on the ship's officer log.

The following trophies are related to pillaging: