Vampirate expeditions are a two-part expedition involving a sea battle with a vampirate ship, and a visit to the Vampirate Sanctum. The expedition can be started with a Vampire Reliquary won from vampirate frays, or from black boxes.

A Vampire reliquary is a compass that is placed in one's inventory. Vampirate reliquaries are won by a random player when a player team beats a vampirate fray. This replaces the sea monster map that is rewarded normally from monster frays. They can also be won from black boxes.

Vampirate reliquaries degrade in three days from the time that they are obtained.

The Vampirate Sanctum expedition is created after three consecutive wins over a vampirate ship. The expedition will be located at a nearby league point, indicated by an X on Yer Known World and league tracker - red if the expedition is active, and grey if inactive. Upon reaching the league point, any officer in the crew owning the ship can order the pirates aboard into the sanctum by pressing the "Enter the shadows" button located on the Ahoy! tab. When the pirates enter, the following message is displayed on the screen: 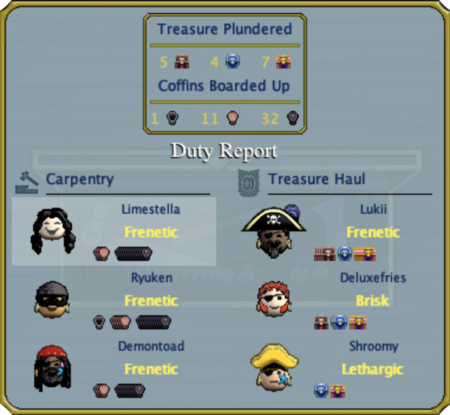 Welcome to the vampire sanctum.

Ye hear the sound of rustling in coffins.

A duty report for the carpentry and treasure haul session is posted and the next fray (or getting back onto the boat) begins shortly after. More vampirates will awake for the second, larger fray - fray sizes increase by approximately 20 per cent each time. This pattern continues, with pirates choosing to carpent or haul after winning each fray. 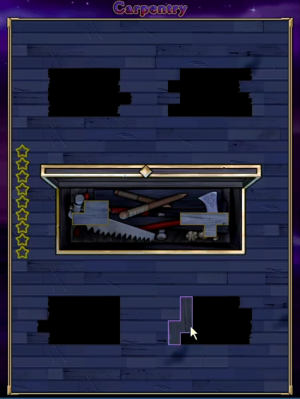 The carpentry puzzle in the Vampirate Sanctum.

The carpentry puzzle in the Vampirate Sanctum allows you to deal damage to vampirates by boarding up their coffins. Unlike regular carpentry, the holes to be filled will are smaller, requiring only five pieces to complete. Sequential masterpieces or grain alignment does not provide any additional bonuses.

At the end of the carpentry session, a duty report is generated which shows the performance of all pirates to the whole ship, displaying the icons of the holes each person has filled, and the total holes filled during that session at the top.

Scoring a Vampirate Proof! is worth 2 points, and scoring a Creaky Coffin. is worth 1 point. The rankings and points required — from highest to lowest, are: 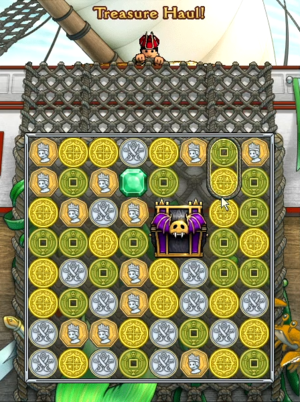 Hauling treasure in the Vampirate Sanctum

In the treasure haul puzzle, treasure chests will sporadically appear, with up to two chests on the board at the same time. Chests need to reach the top line of the screen by clearing coins above them to be added to the booty.

At the end of the treasure haul session, a duty report is generated which shows the performance of all pirates to the whole ship, displaying the icons of what chests each person hauled, and the total haul during that session at the top. Unlike the scoring system for foraging in a Cursed Isles, all chests in the Vampirate Sanctum are worth the same amount of points.

The rankings and chests required — from highest to lowest, are:

Certain clothing items, familiars, furniture items, and trinkets can only be obtained from the Vampirate expeditions. The items are given out in the hauled treasure chests upon porting.

A Vampirate Captain's Hat can be won as prize items from the hauled treasure chests. These hats require a pirate to be Officer and above in a crew, as well as have a Badge to be worn. It is also possible to win a crimson chroma, which may be used to change a single colour on a single item of clothing to crimson.

A Bat familiar can be won from Vampirate Sanctums.

These are found only in treasure chests from the vampirate expeditions. They cannot be purchased at a furnisher. The Blood Box acts as a doubloon exchange on dubloon oceans, while the Nocturnal Locker and Immortal Chest provides access to the coffers in a house or of a hold. Some of these items, such as the coffins and pirate sarcophagus, could be won from past Mystery Boxes or Black Boxes.

In addition, there are normal furniture items available in a dark theme.

A design for a Vampirate class sloop can be won from the treasure chests.

The following trophies are specifically related to Vampirate Expeditions: