An island needs only a completed fort to begin construction of a black market. A black market is 5x5 tiles in the governor's interface. 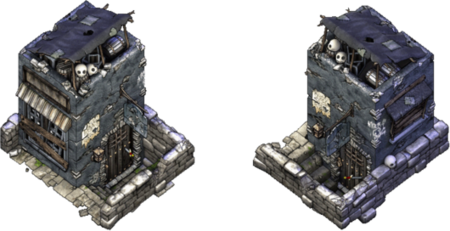 A black market sells black boxes for 10,000 PoE each. These are identical to presents in functionality (including usage as floor furniture), but they come with a random item inside of them. Each black box is labeled with a series number, which indicates the set of items possible inside. The probability of each item in a Series 7 black box is as follows (see Official:Black Box for the official list):

(Items in bold are new, added in with series 7.)

Black box trinkets may be held in portraits.