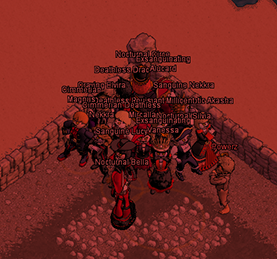 An island overrun with vampirates!

Vampirates are non-player pirates that can be challenged to swordfight brawls. They can spawn in groups on islands. They are one of four types of fray-based monsters, the other three being skellies, zombies and werewolves. Vampirates that are defeated will distribute Pieces of Eight and trinkets to the victors, before fleeing the island. One fortunate pirate will receive a Vampire Reliquary.

Players can take on the appearance of vampirates by using a sanguine amulet. Additionally, players will be temporarily turned into vampirates following a defeat in a vampirate fray.

Vampirates can spawn on a random island (provided no other monsters are present) in a group of 5 to 25, and may be challenged to swordfighting brawls. If vampirates are present on an island, it will be cursed with darkness until they are defeated. They often appear near a portal arrow (either the dock arrow or a building arrow). If an island has buildings, they may be near multiple arrows. On uninhabited islands, they may occasionally appear near the island's inscription instead, if the island has one.

Vampirates which have spawned on a heavily built-up island may be difficult or impossible to find, since they can spawn behind buildings.

Vampirates can also be summoned to islands, provided no other monsters are present on that island already. Charms that will summon vampirates to an island may be won from black boxes found at a black market. They come in three sizes; minor (summons 5 vampirates), medium (summons 15 vampirates), and major (summons 25 vampirates). 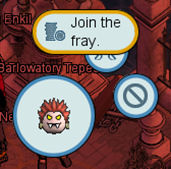 Players may enter the fray in order to help remove vampirates from an island.

In order to defeat vampirates, pirates must first volunteer to fight the vampirates. This is done by selecting "Join the fray" from a vampirate's radial menu. When a pirate chooses to join the fray, a confirmation box will appear reading, "I'll be havin' 100 pieces of eight if ye lose.". Accepting this will place the pirate in the fray and deduct 100 PoE from their purse. Any number of pirates can join the fray.

Pirates who have joined the fray are known as "challengers" and the vampirates will welcome them with a /tell:

"Velcome! Luck be with ye, mortal. Ye shall need it!"

Pirates may also leave the fray by clicking on any vampirate and selecting "Leave the fray". Doing so will refund the 100 PoE entry fee. In addition, if a pirate is whisked away from that island outdoor scene, they automatically leave the fray.

If no frays are started against a group of vampirates for a set period of time, the vampirates will get bored and begin to leave the island, one at a time, every five minutes. This makes it easier to fill vampirate fights should they appear in very large numbers.

After a vampirate leaves, all challengers will receive a message stating the new number of vampirates:

"Humans are entirely boring. Perhaps we can try (Y) of us to yer (X)?"

Vampirates will stop leaving the island once they reach 5 in number.

"Protect yer neck! We will commence when half of ye are ready."

Vampirates will not allow players to outnumber them in the fight, and will choose random pirates to participate. Those who were not selected will be refunded their 100 PoE, and will be sent the following message:

"Ah, poor little blood-bag got left out of the fray. I return yer pittance of a wager. Better luck next time!"

The coffin block is a special block used in the Vampirate fray.

Vampirates fight using the Swordfight puzzle and only equip the Sanguine Blade, which is unavailable to player pirates. Vampirates are tough fighters, and several attempts may be necessary to defeat them.

The vampirates occasionally attacks players with special coffin blocks that requires at least an "double or better" combo to break it. The combo must be performed adjacent to the coffin block to be counted.

Pirates eliminated in the fray are infected with the vampire conversion status, akin to using a sanguine amulet. The condition can be reversed either by using a garlic amulet (purchasable from the palace shoppe), or surviving the fray. The condition is reset when you log off.

Should a group of pirates lose the fight, the vampirates will keep all fray entry fees. Pirates can join the fray again instantly for 100 PoE, but they cannot vote to begin the fray again for a short time. If a pirate tries to vote during this time, they will receive the following message:

"How terribly rude! Coming from low breeding, I doubt ye know any better, but 'tis customary to allow an interlude between duels."

Vampirates will remain on an island until they are defeated.

Once the group of vampirates has been defeated, they will flee the island and the darkness will begin to lift.

All winning pirates receive an equal share of PoE; 1,000 PoE per vampirate, as well as all fray entry fees that have been collected (this may include previous frays). One randomly chosen pirate will win a vampire reliquary compass. That pirate does not have to survive the fray to be awarded the compass.

Pirates who were not eliminated in the fray will also be awarded a Vampirate Fang trinket, which may be held in portraits. These pirates will also be sent the following phrase by a random vampirate:

"Ouch, me toof! Now I just look thilly! Ye can haff me fang but neffer me honor!"

Sometimes a vampirate will make a remark before the group leaves the island:

Occasionally the pirates in a winning fray will receive an an uneven amount of PoE. This extra PoE was originally wagered by another group of pirates who were unable to defeat the vampirates before an ocean reboot. See this post from Cephalopod for complete details.

A "Defeat the Vampirates" mission will appear on any notice board, subject to vampirate availability, if a pirate meets the following criteria:

Clicking the button will randomly whisk pirates to a group of island vampirate. If there are multiple groups present on different islands in the ocean, the mission will whisk a pirate to a random group of vampirates. Vampirates which have been summoned will also cause this mission to appear.

This mission, as well as the Defeat the skellies!, Defeat the werewolves! and Defeat the Zombies! missions, is a way for a pirate to explore islands which would be otherwise difficult to reach. Since islands which are visited once are memorized, pirates who regularly go on these missions are likely to have many islands plotted on their known world map.

The following trophies are related to vampirates:

Arr! This article be a stub. Ye can help YPPedia by expanding it.