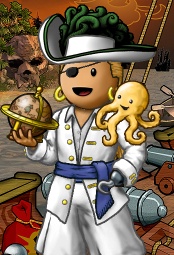 Riggie is senior officer and tactician of the crew The Mad Tea Party. He can be found sailing the Sage Ocean. He is also a member of United Pillagers Across Sage, Hunters of Brigand Kings on Sage, and Flotilla Hunters of Sage.

When Blackvixey left Greed's Ambassadors to form Defenders of Truth, Riggie took on many of her duties including crew training, promotions and being an executive officer for Grumbler on pillages. During the summer of 2006, Riggie became the full time captain of Greed's Ambassadors as real life claimed much of Grumbler's time. During this period Riggie also became a prince of Notorious and unofficially held the post of Minister of the Interior and lead event runner.

In December 2008, Riggie and the other active members of Shanghaied decided to merge with The Mad Tea Party due to the long standing interaction between the crews and the various projects they ran together.