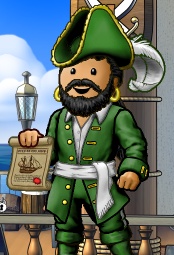 Grumbler can be found sailing the Emerald Ocean. Prior to the ocean merge, he could be found on the Sage Ocean.

History of a captain

Grumbler has been playing Puzzle Pirates since December 2005. He drifted a lot during his first couple of months playing Puzzle Pirates. Jobbing a lot and trying several different crews until he landed with The Outlawz under the guidance of Thejester. During his month of being with this crew, Grumbler rose to the rank of senior officer and second in command.

But after a month, Grumbler grew restless with being second in command and wanted to take on the responsibilities as captain. So with a handful of friends by his side, he left The Outlawz to form Greed's Ambassadors to take on new challenges and new adventures on March 25, 2006. The crew, over the passing months, has become a force to be reckoned with, spending most of that time on the crew fame list.

To date, Grumbler has participated in several blockades and currently sports a fashionable pegleg which he picked up during Kasidim I while helping Notorious colonize the island.