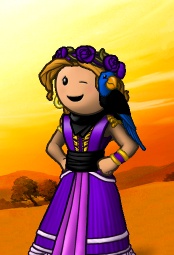 Zava plays primarily on the Sage Ocean, where she is captain of the crew On the Rocks. She can also be found in the crew Black Death on Midnight. Although Zava has pirates everywhere, she rarely plays other oceans.

Zava joined the game in Feburary 2005 after reading a Slashdot comment written by Darvid. She downloaded the game immediately, but was unable to play because she was in the middle of a class. Instead, she read the entire documentation and checked out the forums. Later that evening, she washed up on Turtle Island. Her first pillage also became her first crew: Zava was recruited into Infernal Infidels by Saltine, Swamprat, and Saltycdawg. She would remain there for nearly a year.

In June, she was promoted to the position of lady within Midnight Armada. As a titlee she worked to minimize the communication gap between the royals/titlees and the rest of the flag. Along with Ninjaguy, she also spent a lot of time explaining the new housing and laying out possible housing placements on Park. She started becoming impatient with the amount of talking seemingly required to accomplish anything within Midnight Armada. She knew there must be other ways to run flags, but was unwilling to leave her crew. Also, she was quite interested in the mechanics of war and blockades and knew her flag was not likely to experience those. As a result, Zava began exploring other oceans.

Her preferred position in a blockade is a combination of land-side admiral and jobbing contact. Blockades in italics were won. Blockades in bold were headed by Zava; unbolded lines denote a co-coordinator position.