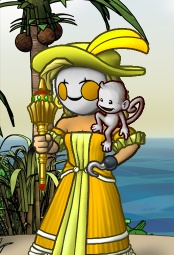 Ynahteb is a pirate on the Sage Ocean. She is the senior officer and Flirt of the crew Perilous Puppets and queen of the flag The Sewing Circle.

Ynahteb was spawned on Sage in November, 2005. She soon joined the crew The John Galt Line, but did not get very actively involved in the game until after it merged with Perilous Puppets. Once a part of this perilously poetic crew, Ynahteb began to appreciate all that Y!PP had to offer and soon rose to officer. She has remained in the Puppets ever since and has held every possible position therein (including captain, during mutinous times), although she usually acts as a senior officer.