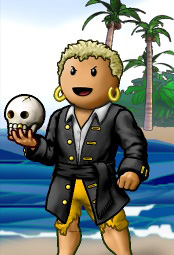 Shodan, although rarely seen by the general public, bears one of the most famous and widely-recognized names on Y!PP. His contribution of Sho Girls, the notorious inn on Admiral Island that bears his insignia, has served both the Sage and Emerald oceans as a main trading hub for more than half a decade.

Shodan originally became known as an exceptional puzzler, making appearances on 12 Ultimate lists for the Sage Ocean. However, he later traversed into the political scene, gaining notoriety as founder and monarch of the flag Go with the Flow.

He announced his intent to retire from Puzzle Pirates in April 2006, and logged-in once more on May 20 to navigate in the Caravanserai II blockade; it was at this point he disbanded Go with the Flow. Still, the call of the seas was too strong and he returned to Y!PP later that same year, forming Passive Aggression on December 28. He would go on to win several blockades as king of PA.

Currently, Shodan functions as Senior Officer of the crew On the Rocks and is a member of the flag Twisted Parallax.