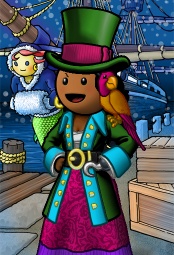 Tilinka is captain of the Perilous Puppets on Emerald. She is an avatar artist.

Tilinka spawned on Sage in August of 2005. She founded the Perilous Puppets on September 11, 2005 with the help of Rasputina.

Tilinka was a princess and events coordinator of The Red Flag Armada until February of 2006 when she was crowned queen of Anarchy. After numerous confrontations with flag mate Nikolaas over insults to her clothing and the sniping of the custom ship name Holy Sunfish, full scale anarchy (ironically) consumed Anarchy. In May of 2006, Tilinka created her own flag, Tiny Flag and promptly declared war on Nikolaas' flag, Minute Flag.

Tilinka's Ultimatum Issued on September 14th, 2007. As of June 2012, the first and second demands have been met.

I, Tilinka, Evil Genius and Puppet Extraordinare do hereby issue the following ultimatum to the people of Sage.

I am holding your Number One Gunner rank hostage.

It is my intention to gun only in Atlantis henceforth. Atlantis is far more amusing for me than pillaging, and I only make a decent profit at it if I am gunning. But those are only justifications. I'm really doing it so I can be evil and laugh a lot. As the only other ship activities I participate in are blockades and merchant runs, my gunning Ultimate is NEVER GOING TO DECREASE.

Fact: As of today, September 14th, 2007, the top six gunning slots on Sage are ordered by experience. Guess who has more?

I will cease to hold the #1 Gunner trophy hostage if any of the following demands are met.

Spandex clad do-gooder types with poor fashion sense (yes, I am aware of the irony) are welcome to try to defeat me. In the meantime, I shall be practicing my cackle.

Further Demands Issued on June 3rd, 2008 following the release of magenta cloth. As of June 2012, demands 2, 5, and 8 have been met; arguably, her sixth demand (Dastardly moustache wax) has also been met.

Your bowing to my demands for magenta cloth has gone directly to my head. I have glued on a moustache and bought one of those nicer silk lined capes that swishes a lot. I am thinking of also investing in a monocle.

As self-proclaimed evil mastermind of Sage, I issue the following demands.

I would like to take this moment to thank everyone who voted me, and all my fellow contestants who clearly did not spend nearly enough in bribes. I couldn't have done it without you.

Now, for my demands:

I will relinquish this very shiny hat upon seeing a majority of these demands met.

Demands Yet to Be Issued

Roughly from newest to oldest. Some may well be missing.

Tilinka has a small collection of Cod named and custom renamed ships. Note: in 2019, Tilinka's account was compromised and this fleet was stolen. While many of the ships have been recovered, she is very interested in buying back the rest of them.