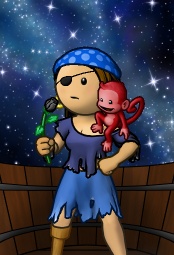 Bisquick is the captain and Cartographer of the crew Ransack Marauders on the Cerulean Ocean. She is also an avatar artist, and was once the governor of the island Midsummer.

Bisquick was unceremoniously chucked off the Pollywog and onto the docks of Eta Island for the first time in August 2005. Without having the faintest idea of what to do next, she found herself on the deck of a sloop under the friendly command of Pjotr. After a rather un-epic struggle with the bilge through a couple of confusing battles, Bisquick was presented with an invitation into the crew, Ransack Marauders, thus starting her pirate career.

Upon the encouragement of her crew mates in October 2005, she followed Feegle and Featherfin to the forums and entered Bia's Spooky Vignette contest. After walking away from the her first event with an honorable mention and her first sloop, the Spooky Bis, Bisquick decided she hadn't had enough. As the years went on, she participated in many bake-offs/competitions and various contests that involved visual art, music, poetry, and prose.

Nowadays, she can be found romping around Cerulean as Fannon's punching bag.