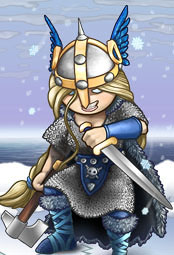 Brynhild Skullsplitter was released onto production oceans with release 2007-12-12. Like most brigand kings, she can be fought in either a swordfight or rumble. She pre-owns all "chosen-to-be colonized" islands, and appears to have a preference for longships.