The Cartographers is a crew on the Cerulean Ocean. It was founded October 27, 2003 and flies the flag of Crimson Tide.

The Cartographers, one of YPP's oldest continuously-active crews, places an emphasis on giving all crew members an opportunity to participate in every aspect of the game such as pillaging and shopkeeping as well as non-puzzling activities like event planning and the political/social game. We actively seek out friendly and mature folks to join us and pride ourselves on training (we feel) some of the finest officers in the game.

We are always looking for good mates to join us!

We set sail every Monday at 5PM Pirate time (that's 8PM US Eastern for the time-zone-challenged) for our weekly pillage, which is a great way to meet the crew, have some fun and make a bit o' poe along the way. Join us for some booty-kicking fun on one of YPP's longest-running scheduled pillages! We usually begin loading approximately 15 minutes before the hour. Send a tell to any officer in the crew who's online and we'll job you up!

The Cartographers own two shoppes as a crew: Descartography, a shipyard on Eta Island, and Enrico's Fermiture, a fine furnisher on Eta Island. Members of the crew also own an assortment of stalls located around the ocean. 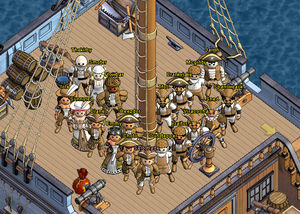 A crew photo from the beta Azure Ocean.

The Cartographers were originally founded in the Azure Ocean on August 11, 2003. The crew was captained by Selbstlade with Arctander as senior officer and co-founder. They instituted brown and white as the crew's official colors.

On September 26, the crew merged with The Titanic Mu-Mu Pirates, bringing in Emmy, Choto, Sunny, Sned and Tehanu among others. Some time after, the Cartographers decided to leave The Olympians flag they were part of after a dispute over a shipyard for the crew. They struck out to found a new flag, Compass Rose.

During the Azure period, the crew was successful enough to have its name permanently inscribed at the third tier (100-500K PoE amassed) on the Azure Memorial located on Midnight's Alpha island.

When Midnight launched on October 27, Compass Rose and its crews reformed there. Soon after, on December 23, the flag arranged a merger with Sanctioned Insanity and became Silver Dawn, where The Cartographers remained as a key member for nearly four years.

In January 2004, Selbstlade (known as Celb on Midnight) stepped down from the captaincy. A crew vote made Choto captain, while Sunny received the crew's royalty seat in Silver Dawn. Shortly thereafter, Diven, monarch of Silver Dawn since its formation, decided to step down. Emmy was elected in his place. Her term was fairly short, however, and she stepped down by March.

The Travellers, flagmates with the Cartographers since the formation of Compass Rose, merged with the crew in March. The Travellers brought their captain Diamondblade, as well as Crazyluigi, Borgman, Colourbeard, and Leperflesh among others to the crew. In June, Sunny gave up her seat as the royalty representative, replaced by Pleiade.

Silver Dawn colonized Eta Island on July 24, 2004. Shortly afterwards, in August, the crew got its first shoppe on the island, Descartography. Also in August, Sunny became captain after Choto relinqueshed the position. She named Crazyluigi as her first mate.

Longstride joined the crew in March 2005, and was promoted to Senior Officer in June.

In June 2005, Pleiade gave up the crew's royalty seat and was replaced by Sunny.

With the introduction of housing and furniture in August 2005, the crew built its second shoppe on Eta Island, Enrico's Fermiture.

The crew was able to acquire an iron monger shoppe, Beach Blam-Kit on Zeta Island, in October of 2005 thanks to negotiations by Daedalus, who previously ran an iron monger stall on the island. In the same month, Sunny's royalty term ended, and she was replaced by Muffynz.

Later in the month, on October 26, flagmates Easily Distracted merged with the crew, bringing in their captain Crispix, Cairi, and Scottish among others.

Captain Sunny was elected monarch of Silver Dawn and took office on January 1, 2006. After the coronation ceremony, Sunny passed the captain's hat to Crazyluigi, who chose Darianne as his first mate.

In February, Muffynz's term as royalty representative expired, and Darianne was chosen as his replacement. In June, Darianne's term ended, and she was succeeded by Omege. He stepped down from the position in September, and Crispix was elected as the next representative.

The following month, Crazyluigi decided to retire from the captaincy, and senior officer Daedalus was chosen to be captain. Longstride was chosen as his First Mate.

After the series of blockades of Eta Island which ended in the loss of the island to Dies Irae, Senior Officers Pinkylee, Zingman and Darianne left the crew to form a new crew called Siochan Leat and Senior Officer Crispix joined Broadsiders.

Former Captain Celb (AKA Selbstlade) returned to the game for a visit after a long absence.

Scottish was elected to be Royal after Crispix's departure. Crispix agreed to buy out the crew's claim to Lab Coats, which was formerly an Easily Distracted crew shoppe, for a payment of 200,000 PoE to the crew.

Early 2007 started quietly but when the Silver Dawn-owned island of Cleopatra's Pearls was blockaded by the flag Incredible (Cleo IV), the flag had difficulty rousing a quick response. During the chaotic days leading up to the weekend blockade, Silver Dawn's Queen Deirdremac was unable due to personal commitments to lead the flag and named Captain Daedalus, then the Lead Diplomat of Silver Dawn, as interim monarch on the eve of the blockade. The island was successfully defended. After initially intending to serve only as a caretaker monarch, Daedalus changed course and was elected as the eleventh monarch of Silver Dawn in March. Daedalus served only briefly as Monarch and stepped down in June 2007 when internal disputes made it impossible for him to continue to serve effectively.

During this time, the crew continued to thrive, hitting a peak active membership of over 60 pirates and remaining the largest crew in the flag. When Scottish's term as Royal expired, SO Wildrosie was elected as the Royalty representative for the crew. Fleet Officer Mackinnon was also promoted to Senior Officer during the summer.

In late September The Cartographers -- the last remaining crew of the founding members of Silver Dawn -- voted to leave the flag and departed on October 5th. After a period of flagless existence during which a new forum site was established for the crew, the crew held meetings with a few flags to explore membership and ultimately voted to accept an invitation to join the flag Don't Panic in mid-November of 2007, where it remained until the flag disbanded.

In January of 2008, Fleet Officer Seaspirit was promoted to SO, but departed shortly thereafter. The crew, still weary from the lengthy effort to prop up Silver Dawn, moved to a lower tier of activity as several members left the crew, semi-retired or left the game completely.

The crew was fully welcomed into Don't Panic and, in June, Captain Daedalus was granted a royalty position in the flag and First Mate Longstride was honored with a title. Senior Officer Wildrosie requested a reduction in rank to fleet officer to reduce her responsibilities in the crew.

During this period, the crew stayed active primarily through sticking to the scheduled Monday night pillages (now one of the longest-running scheduled pillages in the game if not THE longest) but largely stopped recruiting new members, though Dreadkiaili, formerly a SO in her previous crew, was a welcome addition and reliable hand on the weekly pillages.

The first half of 2009 was largely similar to the previous year as the crew maintained the weekly pillages and tended the crew-owned shoppes. In March, the Iron Monger Beach Blam-Kit, on Zeta island, was sold to Pas, a flagmate in Don't Panic, because its primary manager, SO Cairi, had left the game.

In July, FO Dreadkiaili was promoted to Senior Officer for her wise advice and distinguished service to the crew.

Shortly afterwards, Queen Limpalong of Don't Panic held an in-game meeting on July 19th to announce that, due to time demands and other issues, she had decided to give up Don't Panic's long-held island of Papaya and disband the flag within one week. This was quite a surprise to nearly everyone but the decision had been made and a main forum thread was put up as the public announcement of both the flag's imminent disbanding and the event for the giveaway of Papaya island.

After the sudden dissolution of Don't Panic, The Cartographers accepted an invitation to join the flag Crimson Tide in August 2009, where some fellow former Silver Dawn friends had also taken up residence.

In February of 2010, Daedalus was granted Princehood in Crimson Tide when long-serving royal Andyp stepped down. Also, First Mate Longstride was granted a Title once again. The weekly pillages also became significantly more lucrative due to strong flag support and the crew set a payout record at the Feb 15th war brig pillage which paid an astonishing over 10,000 poe per pirate for those who participated in the full two-hour pillage.

Captains of the Cartographers

The crew forums are located at http://cartographers.myfreeforum.org/