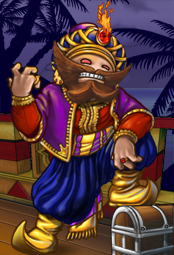 He appears to have a preference for sloops, cutters, dhows, baghlahs and xebecs. Many of his ships have flame-themed names.

Azarbad The Great normally takes "Arabic" ships in his flotillas, like Dhows, Baglahs and Xebecs. But doesn't mean that he won't place some war ships like War brigs and War Frigates.