Armed Cocktail Party is a flag on Sage Ocean. It was created by Zava on May 20, 2006 following the disbandment of Go with the Flow. 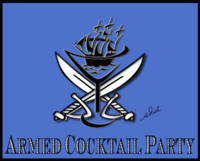 Flag of the Armed Cocktail Party

Please note that the following list of deeds will bring you to our attention. We'll likely show you our appreciation of such actions via a declaration of war. Thank ye.

On June 2nd, they originated the ACP Convention, a new war convention.[1]

On June 17th, ACP dropped a warchest at the end of Round 2 of Amity II, after noticing that both the defenders and the attackers were not yet on the board after 15 minutes of Round 2 had passed. ACP prepped, speed sailed ships, and had war brigs on the blockade board in roughly 30 minutes for the beginning of round 3. This included moving stock and ships from as far away as Wensleydale. ACP won Round 3 by over 100 points, but narrowly lost Round 4 in the final minutes. ACP was the first flag to perform a round 2 drop on Sage Ocean, and they posted a post-blockade statement in Sage Parley shortly after the blockade ended. [2]

On July 31st, Igniknot stepped down as monarch, and Fannon became interim monarch. She led the flag until August 8th when Tortie was elected as Queen of the flag.

On September 10th, Itsacon and his crew, Buy Me a Pint, joined Armed Cocktail Party as the third installment to the shindig.

As Queen, Tortie created a series of monthly events. These were designed to entertain her own flag, but were also open to participation from the ocean as a whole.

ADMIRAL Isl., Sept. 1 /YPPNewswire/ -- Armed Cocktail Party (OTC BB: POE.OB) ("ACP") today announced its Campaign for Literacy on Sage. "We have had enough of incoherent flag and crew statements," commented Tortie, ACP's Queen and CEO. "What good is it being Queen, if nobody speaks the Queen's English? We are today declaring war on any flag which has itself declared war on grammar and spelling." ACP announced its intention to declare war on every flag which is incapable of expressing itself coherently, either in its flag statement, or through those of its constituent crews.

"This Campaign will last throughout the month of September," said Queen Tortie. "War will continue against the offending illiterate flags unless and until they give us the satisfaction of correct written English or we receive tribute." Industry sources indicated that sufficient tribute would entail furniture to outfit a remedial schoolhouse for the illiterate, such as a desk, globe, or chair. Queen Tortie further invited other flags to join the Campaign for Literacy on Sage.

Asked for comment, pillage industry analyst Literate Clyde noted, "This is a bold, and, frankly, long overdue move for a flag in ACP's industry sector. Of course, those not native English speakers will not be subject to any penalty."

Headquartered on Admiral Island, Armed Cocktail Party does business in the Sage Ocean through its wholly-owned offshore subsidiaries, On the Rocks and Shaken Not Stirred.