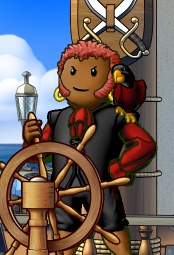 This page is protected because it is linked to in-game from the Avernus memorial on Sakejima Island, Cobalt Ocean. To suggest changes, please use Talk:Avernus.

Avernus was the winner of the Who Wants to be the Governor of Sakejima Contest (Cobalt). For winning the contest, he gets to be the governor of the island and reform it according to the plan he submitted for the contest. His plan includes giving away one of every shop type and culminates with a blockade at Lima Island (Nemo is his arch enemy) Avernus summoned 4 demons to help him in his task of reforming Sakejima: Deathdemon, Wardemon, Faminedemon, and Plaguedemon. Avernus' main pirate is Av

Hades sat on his crumbling, deserted island of Sakejima Island and cursed his father for giving him nothing but pain and anguish in the Underworld while his brothers Poseidon and Nemo (an Alt of Zeus) frolic in joy and happiness on the surface world. "I am sick of Nemo and his proclamations!" shouted Hades as he kicked a stuffed monkey lying nearby. "I will show him, I will defy him, I will make the Underworld of Sakejima the finest place to be, I will form my own army of scurvy pirates and I shall squash my little brothers between my thumb and fore finger like the sniveling little termites they are!" Hades gazed down upon his pit of tortured souls and thought "First, I need a leader, a great leader, a leader that will sway the masses to my side. So many torture souls to chose from...." Hades rummaged through the standard Midnight fare of pirates and decided some were just too pitiful (Parthanos), some too sedentary (Misery) and some just plain too weird (Looseweed). No, Hades decided. This daunting challenge requires something new and innovative. And then Hades himself reached toward the pit of despair and found something evil, something that no one would suspect, something to do his bidding and make the goodie goodie Nemo and Poseidon pay!

The night on Sakejima was quiet and still, but something stirred in the nearby trees. The island turned dark as the skellies emerged and silently surrounded the green swampy pond. Hades appeared on top of the palace and laughed as a dark storm began to form around the blood red moon. Hades shouted into the rising winds, "Arise my minion, I command you to rise!" From the churning storm a streak of lightning struck the green ooze swamp lake and a figure began to emerge, a dark figure with hair brighter than the fires of Hell, a figure that would forever change the island of Sake. I am Avernus!

Avernus ran contests from Nov 05 to Feb 06 culminating with the successful blockade of Lima Island in which they crushed Nemo (3-0) Avernus gave away 1 shop of each type and more:

This was a contest to see who could sell the most stone to Avernus in a given period of time.

The Bank was given away in an evil trivia contest.

This was a contest to see who could design the best new piece of clothing.

This was a sloop sinking competition entered by flag and lasted several weeks.

This was a last solo sloop floating on a blockade board contest for Avernus' Black/Maroon Parrot named Nevermore.

This contest required the submission of a Death Chant against Nemo in preparation for the Lima blockade.

The was an exclusive stick SF tourney.

This contest was to see who could sell the most fruit to Avernus is a two week period. (Avernus collected over 50,000 pieces of fruit and 52 fruit cakes.)

Avernus' rule of Sakejima culminated by crushing Nemo at the Lima Island blockade. Avernus is giving Lima away to the person with the best plan. Avernus also won the black sheep Smelly Nemo which now roams the docks of Sakejima.

I am the human incarnation of the Gates of Hell. Hades, in his infinite wisdom, chose to bring me, the Gates of Hell, to life so that I could at will unleash the fury of hell or imprison souls to an eternity of flame and pain. I shall utilize the energy of a million tortured souls to construct an island that is fitting for our great lord Hades. When I am done, I shall cough and spit brimstone down upon all that openly oppose Hades or tacitly follow Nemo and Poseidon like sheep to a slaughter. I am the gateway to all that is evil and my lock has been broken.... prepare for hell across the island, and then the ocean.