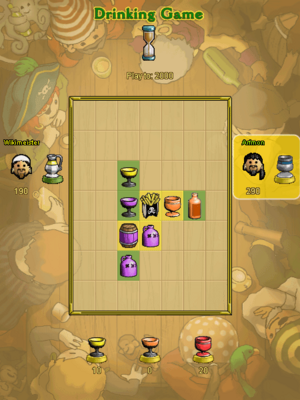 Drinking is a game for two to six players which involves using the mouse to place pieces on a 7 x 7 board. Each player starts his or her turn with three pieces to select from and each piece has an associated point value. When you place a piece, you receive the point value of the piece you selected plus a bonus for placing the piece on the board. Completing a row or column of seven pieces yields a bonus score.

The drinking game may be played from the drinking table or parlor games table located at an inn or other locations in the game. You may also challenge another pirate or NPP to a drinking match or start a drinking tournament. Missions may also be found on the notice board to play against NPPs of increasing difficulty.

Drinking is free to play two days a week.

The rule for placing the standard drinking pieces is simple: To play a piece onto the board, it must match the piece (or pieces) above, below or to the side in either type or color. For example, a red pitcher may be played next to a pitcher of any color or any red piece. Games can use either four, five or six types of pieces.

If no pieces can be placed on the board, the player must "drink" the piece. If a player drinks three pieces in too short a time, they "pass out" and lose two turns. Players may also elect to drink a piece at any time to receive its point value. A player's level of "drunkenness" drops a bit each turn that they do not take a drink.

Piece point values start at zero. For each turn, the point values of the available pieces to choose from are increased by 10 points.

When a row or column is completed (seven pieces) then the player with the majority of pieces in the row receives a bonus.

The game ends when a specified point value is reached (the default is 1500). Optionally, the game may instead be played until the entire board has been stained, in which case the player with the most stains on the board at the end receives 200 extra points.

Pieces are placed in each persons use area at random, so it is best to try to decide which piece a player will use ahead of time. With the new revamped drinking version the piece with the highest value is automatically highlighted for each player; however this does not limit the piece that can be used. For example: A hook worth 10 points, a keg worth 10 points, and a keg worth 0 points comes up. A player may choose the keg worth 0 points to use on an empty or unstained section of the board. Although the pieces assigned value was 0 the staining of the board gains points, and may also prevent his or her opponent(s)from scoring.

Mugs, which can be purchased from a distillery, have special abilities which affect gameplay in drinking by providing various bonuses (some also have drawbacks). Only one mug can be used at a time by a player, and a mug must be equipped like a sword or bludgeon to be used (or a specific mug type must be set for a tournament). Mugs may have a doubloon cost on the doubloon oceans; on subscriber oceans, some mugs can only be used by players with subscriptions.

The fries, cask and hook

There are three pieces in the game which have special attributes. The special pieces may also be consumed without using them on the board, though there's seldom a reason to unless you're really desperate to keep a piece out of the hands of an opponent (perhaps you can't play the hook or cask but when you play a valid piece the opponent can). The cask will make you more drunk; the hook does not affect your intoxication level; the fries remove a level of intoxication.

The hook can be used to remove any piece from the board and stain the (now-empty) space with the player's color. The player using the hook receives the point value of the hook as well as the bonus for staining the square.

The cask (also called "barrel" or "keg") is a colorless item that may be placed next to any single colored piece or group of same-color pieces. When it is placed, it changes color to match the piece(s) that it was played adjacent to. When a row is cleared, there is a 50 point bonus for each cask in the row. To play a piece adjacent to a cask, it must be the same color as the cask, and two casks may not be placed next to one another.

Fries (or "chips") act like wildcards, as any piece can be placed next to them. If "drunk", the drunkenness of the player goes down (to 'zero'). If played, the drunkenness of the opponent goes down (to 'zero'). At least one fries is always available at the beginning of every game, and any number of fries can appear in the initial hand, up to three. In Classic drinking the fries are always the first piece given to the player to move first.

If there are no longer any pieces on the board of any type, fries will automatically be added to the hand, or given to the player to move next in Classic drinking. This situation can occur at the start of the game, if the only remaining row with pieces in it is cleared, if the last remaining piece on the board is removed by a hook, or if the player to move first drinks the fries. Fries can also come up as a piece at any time during the game.

The core strategy of the drinking game is to try to clear rows that have the majority of your pieces in them while blocking your opponents from doing the same by placing pieces so that an opponent cannot complete their rows.

In a two player match, it takes four pieces to have the majority of a row so once you've done that you can turn your attention elsewhere. In a game with more than two players you may be able to "lock in" a row with fewer pieces. Once a row is locked in, try to build additional rows.

Use the cask, hook, and chips/fries wisely.

The opening placement of fries is often an important decision to be made in a drinking match. Before drinking was revamped, a popular strategy was called "Corner Fries." This, aptly enough, involved placing the initial fries in the corner of the board. Because of the low number of possible placements this allowed, it often led to early drink-outs where both players passed out, and ended the game early. However, since it could backfire, "Corner Fries" was considered a toss-up. Many players disliked "Corner Fries" because of the element of luck that it added to the game but it is an easy way for the player who moves first to control the board and because many experienced players are used to it, "Corner Fries" remains a strategy that is still used, though it is not as vilified as it was before the drinking revamp.

Since fries can be placed anywhere on the board, there are a wealth of opening movements, but most are substantially similar. Besides "Corner Fries," one of the most commonly played openings is to place the fries directly in the center of the board. While not necessarily a worse move, placing fries on another spot in the board does not occur as often.

It is sometimes more useful to drink ("chug") a piece, such as one that has climbed to a high point value, than to play it onto the board. It is also possible that a player will be forced to chug when there are no more moves available on the drinking board.

Choosing the right mug for your style of play is important. In a game where there is a mix of mugs and cups, the wooden cup users are usually at a disadvantage.

Expert drinkers not only know how to play to their own mug's strengths, but also know how to adapt their style of play according to the mug that their opponent is using.

Below is a list of some suggested strategies for drinking based on different mug combinations, and a table to show which strategy to try based on the mugs that you and your opponent are using.

Click on the links in the table, where available, for a detailed page on how the strategy works.

Drinking was overhauled at the end of June 2005 to its current form, although the mug effects were adjusted in the aforementioned March 2006 release. The changes introduced eliminated the ending of games due to drink-outs and expanded the size of the hand of pieces to three. This reduced the effectiveness of widely-used strategies like "Corner Fries" greatly.

In classic drinking, pieces have no value and only one piece is available to place; if the player cannot place the piece, he must drink the piece instead. A player loses four turns if he or she becomes drunk. Placing a piece on an unstained square doubles the points awarded through that move. The cask has the same point value as under normal rules. At the end of the game, regardless if all squares are stained or not, the player with the majority of stained spaces on the entire board scores additional points. The player with the highest score when a round finishes (either when all spots on the board have been used or all players are passed out) wins that round.

The presence of Drinking is the reason that the box edition of Yohoho! Puzzle Pirates is rated "T" by the ESRB for "use of alcohol".

Cleaver has posted in the forums that the Ringers could have earned an "E" rating for the game by removing Drinking but chose to leave it in.

The following trophies are related to drinking: