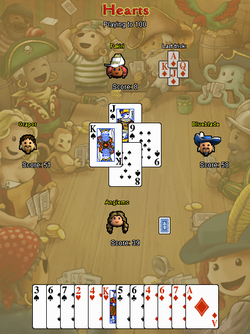 Hearts is one of three card games available at a parlor games table. It can also be played at a patron's card table or a hearts table. It is free to play two days a week.

Hearts is thought to have evolved from Reversis, a trick-taking game invented in 17th century Europe which became popular with the French aristocracy. In Reversis, as in hearts, tricks containing specific cards awarded a penalty to the winner of the trick. However, Reversis also involved huge numbers of counters and side payments. Hearts emerged in the 19th century as a simplified alternative, where each heart was worth 1 point. The Queen of Spades was introduced in a variant known as Black Maria, which is now known as the standard variant of hearts. With the advent of the internet, and with the game's inclusion into a well-known domestic operating system, hearts has become a popular card game around the world.

Setting up the game

As with all parlor games, entry can be restricted to players within a certain standing range, and/or restricted to pirates in the same scene only. Watching may be enabled or disabled, and an optional wager on the outcome of the game can be set.

The creator of the table can control 3 additional variables at the table:

This setting determines how the wagered Pieces of Eight are split among the winners. If no wager is set on a game, this setting does nothing. Note that NPPs which replace players do not take prize money, even if they win.

The game will continue until at least one player has reached the score specified here. Scores can be one of the following:

Hearts is a trick-taking game for four players, divided into rounds of 13 tricks each, played with a standard pack of 52 cards. It is played up to a score of 50, 100 or 200 points. When one player reaches that score, the game ends, and the person with the lowest score wins.

The players in a game of hearts are commonly referred to using the cardinal directions; the rightmost player is known as "East", and proceeding clock-wise the others are known as "South", "West", and finally "North". 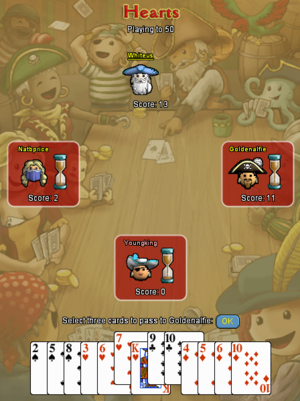 Each player is dealt 13 cards at the beginning of each round. After the deal, each player passes 3 cards to another player. In the first round, everyone passes these 3 cards to the person seated to their left; in the second round, players all pass to their right; in the third round the cards are passed to the player seated opposite them. If the Pass option specified "hold", no cards are passed in the fourth round. Passing continues in this sequence; if "hold" is not specified, the fourth and fifth rounds will involve passing left and right again. After the cards have been passed, the player with the 2 of clubs must "lead" (play the first card of the trick) with that card. 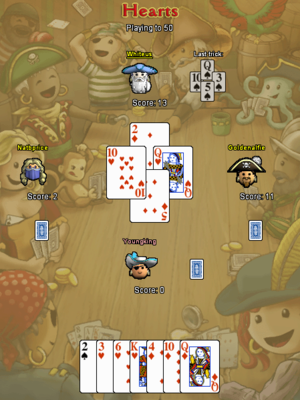 North has led with the 2 of diamonds in this trick. East then "broke" hearts with a queen. Since neither East nor West had any diamonds remaining, and South's diamond had a higher value than North's, South wins the trick.

A trick is a set of four cards, one played by each player. There are 13 tricks per round, thus in each round all of the 52 cards are played. Play revolves in a clock-wise fashion after all cards are passed: the player to the left of the person who led the 2 of clubs plays a card, followed by the player to their left and so on. The tricks work according to standard trick taking rules - a player must put down a card of the same suit if they can (or follow suit), but are otherwise free to play any card. The highest card of the led suit will win the trick. Unlike spades, hearts has no trump suit, and thus if a player can not place a higher card of the led suit on the table then that player can not win the trick.

Once all players have played one card, the trick is complete, and the person with the highest ranking card in the original (led) suit wins it. They now lead the next trick, choosing any card they wish*. Play continues in this fashion until all 13 tricks have been taken, after which the round is over and player scores are totalled up.

*Note that heart cards must be 'broken' (played previously) before they can be led, or the player must have nothing but heart cards in his or her hand. Additionally, one can not play a heart card or the queen of spades on the very first trick. 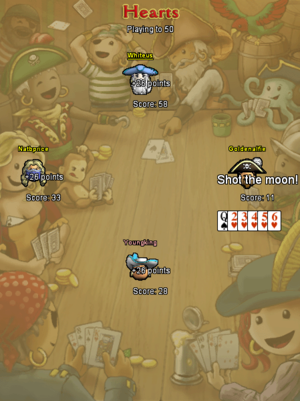 East has shot the moon, giving all other players 26 points.

However, when one player captures all heart cards and the queen of spades (called "Shooting the moon"), then that player receives 0 points while all other players receive 26 points. This is unless another player would win the game as a result of shooting - if this is the case, the player who has shot the moon will lose 26 points from his or her own score.

At the end of each round (13 tricks), player scores are added up. If no player has reached the score limit, play continues, cards are passed again and another round begins. As soon as a player reaches the score limit, the game is over.

The game ends as soon as one or more player reaches the score limit. The player with the least points wins the game. If a wager has been placed on the game, the Pieces of Eight will be distributed according to the Payout type setting. Players' standings may also increase or decrease.

Players may vote for a rematch at the end of a game, provided they can meet the required wager. Note that players do not have to meet standing requirements for rematches if their standings have changed. A vote of 100% (all four players) is required to begin a rematch, and if at least one player is absent then no rematch is possible.

Players are booted from hearts if they disconnect, log off, or are forced out of the game by another puzzle starting. Additionally, players may leave the table at any time by clicking the "dismiss" button.

A player who leaves the table for any reason forfeits all PoE on the table, and his or her standing may decrease as a result of leaving. Leaving a game will also cause an NPP to take that player's place. If there is a wager on the table, the NPP will not win PoE - even if a player with that score would be eligible to win PoE. Instead, the PoE wagered is divided among the other winners if the Payout type allows it - otherwise the wagered PoE is lost.

Hearts etiquette is similar to that of other card games. It is not a set of rules, but instead a list of good practices which can help to keep the game enjoyable for other players. While some points of etiquette may differ between hearts variants, platforms and even countries, some of the more common points and the rationale behind them are listed below. Note that players who know one another well may choose to forego some of the etiquette listed here.

The following trophies are related to Hearts: