This article is about the PoE that is accumulated during a voyage. For the sunshine widget panel, see booty panel.

Booty is the total amount of PoE and commodities pillaged from other ships during a voyage. The booty is viewed by clicking on the "Ye Booty" chest and selecting "Inspect the Booty". 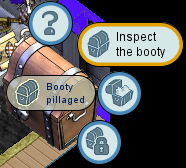 Interface for inspecting the booty. 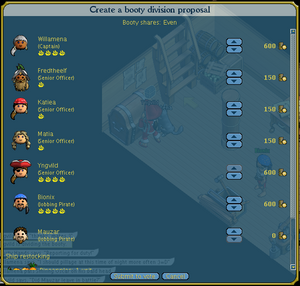 An example of the division interface, with 150 PoE shares. The last pirate shows that he participated in zero battles because he left during the battle navigation portion of the fight and was replaced by a NPP.

Whenever booty is brought aboard a ship, 50% of the PoE is automatically divided amongst the crew. This division is unaffected by the crew's chosen booty share. The rest of the PoE and any commodities or treasure chests brought aboard, are placed in the ship's booty chest for later division at port.

When a ship ports, any player ranked officer or above in the crew can divide (or "divvy") the booty by selecting the appropriate option. He or she will then view a screen with a default booty divide according to the crew's booty shares. The officer can then adjust the booty shares when appropriate (for example, players who left during battle can be given -1 to reduce their share of the booty). Once the division has been approved by the officer, it is submitted for approval by the rest of the pirates on board the ship. A notification is sent to the players, who can vote by clicking on "Vote on booty". They may then vote "yea" or "nay" and a majority is needed to enact the decision.

Each pirate is given a share of the booty based on the number of battles in which he or she participated, indicated under their names in the booty division panel. If the booty being divided is from a flotilla, blockade, or Atlantis, this is replaced by the number of 10-minute segments for which the pirate was present. The booty can only be adjusted up or down by one share for each pirate, except for the divvying officer, who may not boost his or her own share but may reduce it as much as desired.

The crew cut can be lowered but never raised.

At the end of the voyage, booty is divided in the usual way, with a few exceptions. The treasure chests acquired from Treasure Haul are divided based on various tasks completed during the voyage. Below is a complete list of reasons a treasure chest may be awarded to a pirate:

In addition to these reasons, any treasure chests left over that are not allocated to players will be awarded randomly. The vessel owner receives a percentage of chests, just as they receive a percentage of the booty.

As a response to a petition asking about chest division in Sea Monster Hunts, Castor provided this information:

"Each person aboard the vessel (who does something) gets 'chances' based upon their performances. Like 'outstanding carpentry' or 'consistent sailing' and so on. Each of those is a chance for something. A lot of them simply don't 'win' chests in the end. Let's say PirateA has some chances to win chests because they were gunning and sailing and treasure hauling well. PirateB got some chances from bilging and carpentry. Less chances than PirateA. It is possible (though not as likely) for PirateB to get more chests than PirateA because more of his chance tickets 'won'. (Randomly determined).

Basically the Sea Monster Hunt chest division is a raffle. Raffle tickets are won by performing puzzles on the ship, and extra tickets can be won by great performance in puzzles. At the division, each of these tickets may or may not be a winning ticket and thus rewarding the pirate with a random chest.

He would not reveal specific details about these "tickets", so a few questions remain unanswered.

Note: The Sea Monster Hunt chest division is a more complicated process, but it simplified and visualised as a raffle in order to let us understand the basics of the division system. Actual technical details about the process remains untold.

If an officer aboard a ship does not have fleet officer hold privileges, the crew/restocking cut goes into their pocket instead of into the hold after dividing the booty. This is because they cannot manipulate the funds in the ship hold, and so are forced to restock from PoE that is on hand. If a higher ranked officer is on board when the booty is divided, the crew cut will go into the hold and the higher ranked officer will have to either restock or take out the crew cut and give it to that officer. Officers can, however, sell pillaged goods directly from the booty chest before division; payment for any goods sold in this manner is added to the booty chest.

If a ship is at sea when the server reboots, it is whisked back to its last port of call, and the booty is divided according to the crew booty shares.

If all pirates abandon a ship at sea long enough for it to be auto-ported (15 minutes), all commodities and PoE in the booty are dumped into the sea and lost.[1]

After a ship ports, if the booty remains undivided for more than thirty minutes, it is automatically divided according to the crew booty shares.