This article is about the skellie ship. For other articles, see El Pollo Diablo (disambiguation).

The black ship, more formally known as El Pollo Diablo (The Devil Chicken), is a ghostly grand frigate staffed by large numbers of skellies. It sometimes appears on the sea battle board to punish ships when they attack a vessel with a significantly weaker might rating. When it appears, it takes the place of the attacked ship in battle, mercilessly pummeling the attackers until their ship is full of damage, at which point it will grapple to initiate a sword fight. If victorious, it will plunder the majority of booty and commodities from the hold and booty chest of the attacking ship.

The black ship serves to deter pirates from picking what might be considered 'unfair fights' - for example, a crew of eight aboard a cutter could otherwise attack a sloop with a single pirate aboard. Many seasoned officers do not dare seek out unfair fights on the seas, since they are likely to lose everything if they encounter the black ship.

A player vessel, which attacks a ship with a significantly lower might rating than it, risks facing the black ship. Engaging a ship in battle where there is only a small difference in the two might ratings (with the lowest might ring appearing turquoise to the attacker) will never summon the black ship to the battle. Since it is difficult to judge which side of this threshold a ship's might ring falls, many crews instruct their officers not to attack blue-ringed ships at all (including any turquoise-ringed ships).

The exact rules governing the black ship's sudden appearances are uncertain, but it is clear that the probability of an attack within a time interval rises with the number of blue-ringed ships attacked.

Note that the black ship may replace brigands and barbarians, in addition to player ships, in battle.

Players receive the following messages when battling the black ship.

"Avast! Those cowardly dogs were nigh upon ye when a thick dark fog swells from the ocean and the Black Ship emerges! The Black Ship bears down upon yer foes and takes yer place in battle."

Meanwhile, all pirates aboard the attacking ship receive this message:

"Dark clouds gather as ye bear down upon yer hapless victims, and from the miasma emerges the Black Ship to take the place of yer target in battle! Arrrrgh! Ye be doomed fer sure!"

When a player ship attacks a ship with significantly less might and the black ship does not appear, all pirates aboard the attacking vessel receive the message:

"Woe be the crew that spends too much time ganging up on vessels with fewer pirates. There be a legend that a Black Ship sails these waters, evening the score for those that've been wronged."

The ship is piloted by 159 skellies, can traverse obstacles, and is able to read the opponent's every move. It may place 4 movement tokens per turn, unlike ships similar to it in size. It is also immune to cannonballs and grappling. It is extremely difficult to defeat, although past iterations have been successfully fought (see below).

On winning, the black ship removes all goods and booty from the defeated vessel, except for 5 units of the lowest quality rum that is aboard. This acts as a minor PoE and commodity sink to the economy.

On the rare occasions that players have been able to defeat the black ship, it has granted no pieces of eight or commodities to the victors.

The black ship did not always have 159 skellies on it. The Ringers kept changing the amount of skellies aboard the black ship in an attempt to make it truly unbeatable. At one time, there were only eight skellies aboard, due to a booch; it was also vulnerable to cannonfire.

There have been four iterations of the black ship so far:

First variation
The black ship was introduced with Alpha release 2003-06-24 and worked as a normal ship. It could be shot like any other ship, and took damage from rocks if it ran into them. The number of skellies aboard was variable. This incarnation was first defeated when Barrenmore took a full grand frigate out during the Rudder Revolution's 24-hour bash to fight it. [1]

Second variation
With Beta release 2003-10-27 and the opening of the Midnight Ocean, the black ship was turned into the ghost ship that it is now. It became impossible to shoot it and it went right through rocks. However, this was the booched version that had only eight skellies aboard. Another booch resulted in the skellies' swords decaying into foils after awhile (this affected the land-based skellies as well). 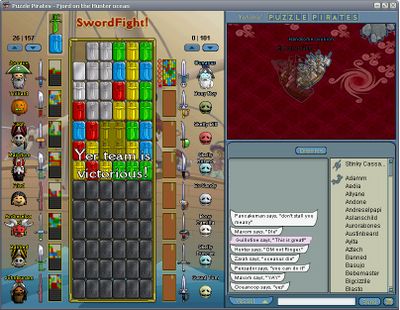 Third variation
This incarnation, with 100 skellies, was introduced in release 2004-01-26, which also brought war. Collision to start the fight early was still possible, until release 2004-04-28 when grapples were introduced. This version was finally defeated on Halloween, October 31, 2006, (explaining the red sea in the image), by a grand frigate pillage led by Fenrir of The Eye, on the Hunter Ocean. Oceanus was aboard the Black Ship at the time.

Fourth variation
With release 2006-11-07, the number of skellies aboard was raised to 159 in light of the most recent defeat.

The black ship has aqua banners. This trivia fact was used during Tedv's Endurance Scavenger Hunt.[2] However, it is possible that the black ship has (unbeknownst to players!) been decorated with furniture by an Ocean Master in one of his or her more whimsical moods.

It is possible for the Black ship to disengage from the battle, provided the defending vessel can avoid damage and grapples for a sufficient time. Ships with 4 moves per turn are more likely to be able to flee, since they can keep the same distance between them and the black ship each turn. Staying at least one square in front of the black ship avoids the chance of damage due to a collision.

The name El Pollo Diablo comes from the Monkey Island video game series. In its third installment, Guybrush Threepwood is told the tale of a demonic chicken, who comes out when the moon is full to peck those who would eat his lesser brethren. His blood curdling "cluck" resounds in the deep jungle...he is "El Pollo Diablo"!