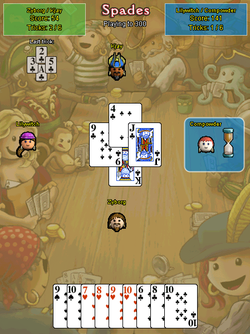 Spades is a multiplayer parlor game and is one of three card games available at the parlor games table. It can also be played at a patron's card table or a spades table. It is free to play two days a week.

This team trick-taking game evolved directly from Bid Whist and Contract Bridge. The major difference between spades and its ancestors is the set trump suit of spades (hence the name). Spades was developed in Ohio, United States, in the 1930s. It gained in popularity during World War II due to it being a game that soldiers could play quickly during breaks between the fighting. It is still popular to this day in colleges and universities as well as break-rooms in factories all over the U.S. With the advent of online play, spades has become a popular card game around the world.

Setting up the game

As with all parlor games, entry can be restricted to players within a certain standing range, and/or restricted to pirates in the same scene only. Watching may be enabled or disabled, and an optional wager on the outcome of the game can be set.

The table creator can also control the "play to" setting with one of the following options:

The game continues until at least one team's score has reached the score specified here. Additionally, the game ends when a team reaches the negative of this value (in which case that team loses immediately). The latter condition is sometimes known as the "mercy" rule.

500-point games are the standard for any professional or competitive spades games and tournaments. Many players in Y!PP choose to play to 300 points instead, because higher score limits mean longer games.

Spades is played by four people, who are split into two teams. It uses the standard pack of 52 cards and standard trick-taking rules apply. The spade suit is always the trump suit. The game is divided into a series of rounds, with 13 tricks to be won each round. Players bid on how many tricks they expect to take at the start of each round, and earn or lose points according to how this bid compares to the outcome of the round. The objective is for one team to reach (or exceed) the play to score that was specified by the table creator. The game will end once a team reaches this score, and will also end if either team reaches the negative of this score. When the game ends in these cases, the team with the most points wins. The game will also end if a player leaves the table, in which case the other team will win by default.

Players in a game of spades are commonly referred to using the cardinal directions; the rightmost player is known as "East", and proceeding clock-wise the others are known as "South", "West", and "North". However the table view is rotated for each player so that they appear to be playing from South's position.

Each player is dealt 13 cards at the beginning of each round. In the very first round, the player occupying the leftmost seat of the table bids first. In subsequent rounds, the first bid of that round passes clockwise around the table. A player's bid reflects the number of tricks they expect to win. A player may bid anywhere from 0 (nil) to 13, but the second bidder in a team cannot make a bid such that the sum of the team's members' bids would exceed 13. This total is known as a team's contract. A player may bid nil on any hand; this means that they expect to take 0 tricks.

A player bids on how many tricks he or she expects to take. Note that while they may choose to bid nil (0), it is not possible for them to nil successfully with this hand.

If two teams have a score difference of 100 or greater, then the team with the lower score has the opportunity to bid blind nil which is worth twice as many points as a standard nil. It is only possible for one team to bid blind nil at a time, and only one player from that team may blind nil. When bidding, initially both teams' cards are hidden. The first team member to bid has the options of revealing the cards or bidding blind nil. If they opt to blind nil, both team members' cards are revealed, and the second team member loses the option to blind nil. If the first player opts to show cards, they may make an ordinary bid. In this case the second player may choose between bidding blind nil or showing their cards (and making an ordinary bid). If a team member has bid blind nil, they must exchange a further two cards with their partner before the round commences. Opponents cannot see which cards are being swapped. 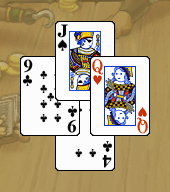 A typical spades trick. South has led with the 4 of clubs. North wins the trick with the Jack of spades.

A trick is a set of four cards, one of which is placed on the table by each player. A round is a set of 13 tricks, thus in each round all of the 52 cards are played. Play revolves in a clock-wise fashion after all bids have been made, beginning with the player who had bid first that round. This player puts down the first card of the trick, or leads. Spade cards cannot be led until they have been played previously (broken), or the player must hold only spades cards in their hand.

The standard trick taking rules apply to spades: a player must put down a card of the same suit if they can (follow suit) but are otherwise free to play any card. The highest card of the led suit will win the trick, unless a spade (trump) card is present in which case only a higher spade card will win the trick. The winner of the previous trick now leads the next one. This repeats until all 13 tricks have been taken, after which the round is over and team scores are totalled up.

Each player has a limited time to play their card. If they do not play it before the hourglass runs out then a random card is automatically played for them. Players who are absent have their time limit reduced in order to speed up play.

After a round has been completed, points are added and deducted from the teams' overall scores. Points depend on whether contracts have been made, whether nils and/or blind nils have been made or failed, and the number of overtricks which the team has taken. To find the total points a team wins or loses after a round, simply add up the points awarded for each event (see the table below). Be aware that for scoring purposes, a "contract" does not include nil or blind nil bids.

A breakdown of scores after a round. Nil and blind nil bids are counted first, followed by contract bids. Overtricks are then calculated, and finally any sandbagging is accounted for. The amount by which the teams' scores change is the sum of these subscores.

To demonstrate scoring in spades, take the following example:

The points add up as follows: 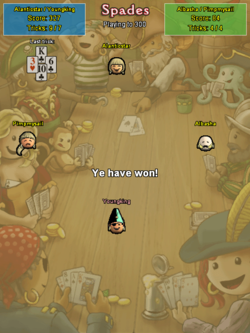 Once a team reaches the score limit displayed (top, center) the game ends.

The game ends as soon as one or more teams reach the score limit specified by the table creator, or when one or more teams reach the negative of the score limit. The team with the highest score wins the game. If a wager has been placed on the outcome of the game, the two winning players' Pieces of Eight will be refunded and the losing team's wager will be split equally between the winning players. Players' standings may increase or decrease, and their experience ranking may also increase.

Players may vote for a rematch at the end of the game, provided they can meet the required wager. Players can opt for a rematch even if their standing is no longer within the range that was set by the table creator. A vote of 100% (all four players) is required to begin a rematch.

Players are booted from the game if they disconnect, log off, or are forced out of the game by another puzzle starting. Additionally, players may leave the table at any time by clicking the "dismiss" button. If a player leaves, that player's team forfeits and loses the game automatically. In spades, unlike hearts, there are no NPPs which can replace absent players on the table. A player who leaves the table for any reason forfeits all PoE on the table, and his or her standing may decrease as a result of leaving.

The following trophies are related to spades: