A rumble is sure to follow after intercepting a Barbarian ship. 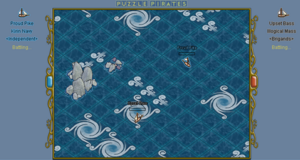 A brigand sloop battles with a player sloop.

A brigand is a type of computer created and controlled ship, and the bots aboard it swordfight the opponents, unlike barbarians, which rumble.

Attacking brigands or barbarians is the primary PoE fountain in all production oceans. When such an opposing ship is defeated (assuming no one has beaten it), PoE and/or commodities are transferred to the victorious players' ship. The amounts are relative to:

Generally, higher might, more players, and tougher opponents (as determined partially by their crew rank) increase payouts. However, having greenies on board decreases payouts.

Because brigands and barbarians are the primary PoE fountain on all production oceans, much energy has been used up trying to work out how best to beat them and therefore earn the highest possible payouts. This thread, which attempts to explain brigand behavior, is a good example. Some brigands and barbarians will attack immediately, while others will allow players to attack first.

Brigands and barbarians are the only source of Kraken's blood. 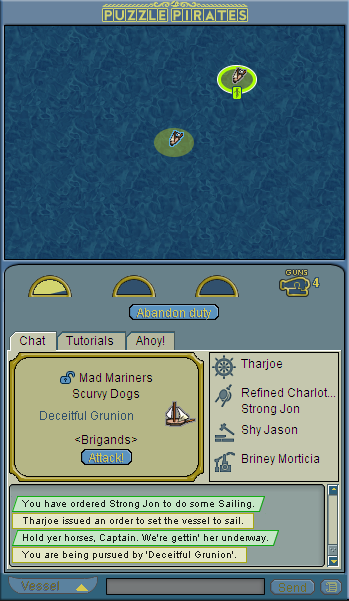 Methods for intercepting the brigands or barbarians depends on two factors: Approach directions and speed. It is important for any navigator to know how to respond in these situations.

If the ships are going in opposite directions, timing is key. It is ideal for the intercepting ship to turn about before the target can pass it. If its timing is too late, they must try to catch the ship from behind, with the 20% speed penalty from turning about.

With Release 2007-03-21, ships matching the voyage's desired settings will be automatically targeted. This aspect was modified in Release 2007-03-23 with a checkbox so officers can toggle auto-targeting of ships.

Brigands and barbarians take 10% of the commodities in the hold, and 20% of the pieces of eight in the booty.