Tournaments (colloquially known as "tourneys") allow large numbers of pirates to compete against each other for prizes and pride. They can be started or joined by clicking on the tournament board, usually placed in inns and palaces. Tournament boards can also be purchased and placed in buildings. 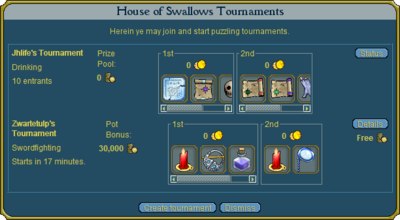 Open tournaments are denoted by the "Details" button on the right-hand side of the screen, and tournaments currently in progress will have a "Status" button instead. The Details button offers more information for each tournament's settings and pirates can click the "Join" button if they decide to participate.

A pirate must be able to meet the specified entry fee to be able to join. Pirates with a wager ban cannot join a tournament with an entry fee, but wager limits do not apply to tournament entries.

The different options are explained below in the Creating a Tournament section. 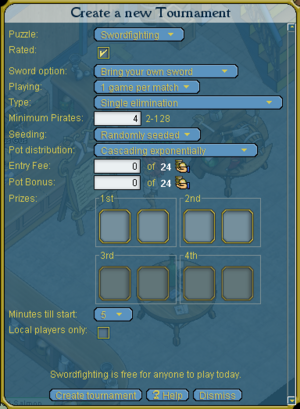 When a pirate clicks "Create tournament" there are several options that pop up in the screen. The picture to the right shows the default settings and the specifics are outlined below.

Swordfight, Rumble, Drinking, and Treasure Drop are the only tournament puzzles. If a player lacks a subscription on subscription oceans, or a parlor badge on doubloon oceans, it is only possible to create tournaments for puzzles that are free that day.

Whether or not the games count as rated.

The options are one game per match or best two of three.

The tournament type can be either single-elimination (with or without a playoff to 3rd and 4th place) or double-elimination.

Once a player loses a match, they are eliminated. If the option to have a 3rd place playoff is chosen, prizes can be allocated for 3rd and 4th place.

Seeding is how participants are matched-up for their matches. Byes, if necessary in the first round, are distributed according to seeding. There's been some controversy about seeding in larger tournaments for prizes such as familiars.[1]

Pirates are matched-up evenly according to rating to stop the higher rated pirates from knocking each other out of the tournament in the early matches. Byes, if necessary in the first round, are given to higher-rated pirates.

This is the minimum number of pirates that need to join the tournament for it to be able to start when the starting time comes. If this number is not met, the tournament will be cancelled and all prizes and PoE will be returned to the participants.

This number can be anything. If there is a fee, the PoE goes into the prize pot.

Tradeable items owned by the pirate (except for items which are presently equipped) starting the tournament can be added to the prize along with PoE. Items can be offered to the 1st, 2nd, 3rd and 4th place finishers, however, the 3rd and 4th place options are not available for standard single-elimination tournaments. If the prize value including PoE, items, and entry fees are worth a total of at least 5,000 PoE, an automatic oceanwide tournament broadcast is sent once the minimum pirate number is reached. This broadcast does not reach those aboard ships unless the total value of the prize pool is 10000 poe or above or there is a familiar as a prize.

There are several options for prize distribution. All items are awarded to first place, but PoE division possibilities are as follows.

This option is an exponential cascade limited to the first, second and third place finishers. First place gets 1 share, 2nd place gets 1/2 share, 3rd placers get 1/4 share, and everyone else gets nothing.

As the option name says, the winner of the tournament takes everything.

How many minutes will count down before the tournament starts.

If this option is checked, the tournament will only appear on the tournament board in the scene it was created and players must join from that location.

Once a pirate joins a tournament, a tournament summary will appear in the Ahoy! panel. The "Allow Watching" checkbox defaults to being checked. Some players may choose to disable watching for the following reasons:

A tournament will be broadcast to anyone logged on once the following conditions have been met: